A “safe zone” in Rojava is averted… for now – TTG

Posted on August 7, 2019 by Andrei Martyanov 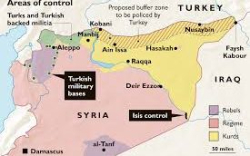 BEIRUT, LEBANON (5:00 P.M.) – Turkish Minister of Defense Hulusi Akar said on Wednesday that talks with the U.S. on a safe zone in northern Syria have been ‘positive’ after a previous meeting left Ankara agitated. “We witnessed with satisfaction that our partners grew closer to our position. The meetings were positive and quite constructive,” Akar stated, as quoted by state-owned Anadolu Agency. “Our plans, preparations, the deployment of our units in the field are all complete. But we said we wanted to act together with our friend and ally, the United States,” Akar continued, adding “if that isn’t possible, we have said multiple times that we will do what is necessary.”

Turkey previously threatened to launch a large-scale military operation to capture the eastern region of the Euphrates River Valley. According to Ankara, the eastern Euphrates region is controlled by ‘terrorist’ groups allied to the outlawed Kurdistan Workers Party (PKK). In particular, the Turkish regime has accused the U.S. Coalition of harboring the Kurdish-led People’s Protection Units (YPG), who Ankara says is an offshoot of the PKK.

Washington has denied coordinating with the YPG, but maintains that they work with the Syrian Democratic Forces (SDF), who is made up of several ethnic groups, including Kurds and Arabs. (Al Masdar News)

That’s the Turkish view of the just completed negotiations in Ankara with the US Embassy to work toward establishing a “safe zone” along the entire northern border with Syria. The US Embassy issued a short, terse statement:

From August 5-7, 2019, U.S. and Turkish military delegations met at the Turkish Ministry of Defense to discuss plans to coordinate the establishment of a safe zone in northern Syria.

The delegations agreed on the following:

a) the rapid implementation of initial measures to address Turkey’s security concerns;

b) to stand-up a joint operations center in Turkey as soon as possible in order to coordinate and manage the establishment of the safe zone together;

c) that the safe zone shall become a peace corridor, and every effort shall be made so that displaced Syrians can return to their country.

Mazlum Abdi, an SDF spokesman, said this after the US-Turkish agreement was announced: “With regard to the safe zone, we certainly accept it and support it if it is intended to support stability and peace in the region, and we have shown a lot of flexibility so far in this context, but there are Turkish conditions that are completely rejected. Turkey wants to stay in the region and control it, or pushing militant factions to be part of the safe zone, this is not acceptable in any way. But in the framework of coordination With the coalition forces and the U.S army, monitoring patrols can be conducted”

In my view, Turkey is holding a strong hand and is playing it well. Turkey has been massing its forces and especially her jihadi allies across her southern border east of the Euphrates in preparation for an invasion to drive the Kurds away from that border. Surely the purpose of this offensive is not so much to eliminate this perceived threat, but to expand the new Ottoman Empire at the expense of Syria. The US agreed to establish a joint headquarters for this safe zone in a desperate effort to stave off this Turkish offensive. The Kurds, who remain the backbone of the SDF, would have rushed to the border to defend Rojava from a Turkish invasion. Although the Kurds would make the Turks and their jihadi allies pay dearly for every inch of Rojava, they are no match for the full might of the Turkish military. Even so, I don’t think Erdogan is ready to risk throwing his full military force into an invasion. An invasion may also spread his jihadi allies too thin. He may very well lose Idlib and the area around Aleppo as the price of gaining a strip of Rojava. For now he is content with what he has extracted from the US Embassy.

Neither the Syrian forces nor the YPG forces are in a position to defend that border against a full scale Turkish incursion. They are both otherwise occupied. Russia has influence, but I don’t think she is willing to bloody Erdogan’s nose or even demand he abandon his dream of a new Ottoman Empire. Russia has a longer term goal concerning her relationship with Turkey. The US dreads an open conflict with a NATO ally and does not have sufficient forces in the area to successfully deter Erdogan’s aspirations. So, although a wide scale invasion of Rojava has been temporarily averted, Erdogan is left sitting in the catbird seat at least for now.

This entry was posted in Syria, The Military Art, TTG, Turkey. Bookmark the permalink.