A Soldier’s Tour of Syria – TTG

Posted on August 1, 2017 by Andrei Martyanov 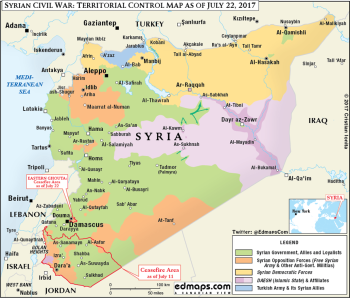 Overall things are going quite well for the R+6. Although the IS and other jihadi forces are still capable of staging limited tactical offensive operations, any gains they make are short lived.

In southwest Raqqa governorate, General Suheil al-Hassan has stated that his Tiger Forces will be in Deir Ezzor by the beginning of September. They are battling for several towns along the Euphrates along with local tribal forces and are aiming to soon take Ma’adan. A few days ago IS launched a counterattack in this area preceded by ten plus VBIED attacks. Suheil and his allies suffered close to forty dead and fifty wounded, but by the end of the day they retook what little ground they lost and continued the advance. A Tiger Force commander described Jihadi losses thusly, “ISIS losses are folds of ours.”

This Tiger Force offensive is also widening the front away from the Euphrates and now occupies a growing section of the Raqqa-Deir Ezzor border. They are poised to attack at both Ma’adan and at the critical road junction in the Bishri Triangle.

Further west a new R+6 offensive is taking place south of Ithriyah. The Cheetah Group of the Tiger Forces has been redeployed from the southeast Raqqa front to serve as the core of this new offensive along with Liwaa Al-Quds, Qalamoun Shield, the 11th Tank Division and elements of the NDF and SSNP. The goal of this offensive is to drive south towards Suknah to isolate the jihadis entrenched in the Uqayribat region in eastern Hama. These jihadists are at the western end of a large bulge in central Syria aimed at Homs and Hama. A quick glance at the above map shows the significance of this bulge. The R+6 has also launched an offensive from Salamiyah towards Uqayribat.

I assess the plan is to reduce the Uqayribat bulge before the Tiger Forces offensive from southwest Raqqa drives to Deir Ezzor. The dual offensive drives into the bulge will either force the jihadis to die in place, pull back towards the Euphrates or be fixed in place to the point they are incapable of any offensive action. The southwest Raqqa offensive will simultaneously take Ma’adan and the Bishri Triangle. They will then be in position to launch a wide offensive from Ma’adan to Deir Ezzor and from the Bishri Triangle to Ash Sholah and on to Deir Ezzor once the Uqayribat bulge is addressed.

R+6 forces are also at the gates of Suknah with every intention of taking it soon. Once Suknah falls, there is nothing but open desert between the R+6 forces and Deir Ezzor. However, the jihadis know this as well. My guess is that they have prepared some kind of defensive lines between Suknah and Deir Ezzor.

The defenders of Deir Ezzor itself have received some relief. Reinforcements and supplies have been flown in from Qamishli. General Zahreddine also noted that some jihadis have pulled out to reinforce their defenses against the Tigers from the north. This has allowed the Deir Ezzor defenders to undertake their own offensive actions. Using a jihadi tactic, they dug a tunnel, mined it and blew up one of the jihadi supply lines into the cemetery area. Zahreddine himself led elements of the 104th Airborne Brigade in a successful immediate assault on the area. He’s one bad mamma jamma.

In the south, SAA and Hezbollah units along with their foreign militia allies are still aiming for T2 and Bukamal. A night laager near T2 suffered casualties and lost a tank last week from a surprise night attack from the jihadis. As beleagered as they are, IS can still bite.

In Al-Tanf, the US is preparing to abandon their positions. They have called for their “moderate jihadists” to turn in their heavy weapons. Without this support, two jihadist groups have already switched to the SAA side. Without US and Jordanian support, the rest of these groups will not last long.

In the southwest corner of Syria in the declared truce zone, Russia has deployed 400 troops as peacekeepers in the Dara’a and Quneitra governates. It is not clear if these are newly deployed military police or elements of the previously deployed 31st Guards Air Assault Brigade, a unit specially trained in peacekeeping operations. Whoever they are, I don’t think it is an accident that they will be deployed the Golan Heights.

Moving further north to the Syrian-Lebanese border, Hezbollah and the Lebanese Army have just completed a week long operation to capture Arsal and defeat the Ha’yat Tahrir al-Sham (HTS) jihadis. Most of those jihadis, around 9,000 including families, will be bussed up to Idlib where they can go fight their fellow jihadis for now.

Of special note is an operation to be carried out by the Lebanese Army in this same area, Ras Balbaak, to rid the Lebanese border region of IS jihadis. I do not know how much assistance Hezbollah will provide to their Lebanese brethren. This will be a serious test for the Lebanese Army.

There is more going on militarily in Syria, but this is all I’ll cover this time. But just as important is the political success of the R+6. Russia, Syria and Jordan have been in negotiations for a long time to end Coalition support of jihadis along the Syrian-Jordanian border and establish a ceasefire. This has been accomplished with dramatic results. I think the presence of the 31st Guards Air Assault Brigade in this area gave pause to Amman. The Americans are part of this ceasefire, but I think they just went along with the inevitability of the developing R+6-Jordanian detente. This  leaves the Israelis with a puzzlement.

The Russian-Turkish relationship deserves a posting of its own. All I will say now is that I have a feeling Russia is in the process of taming Turkey. They can still be bit, but the domestication process is underway. Time will tell.

This entry was posted in Jordan, Russia, Syria, The Military Art, TTG. Bookmark the permalink.

39 Responses to A Soldier’s Tour of Syria – TTG