A studied insult in Cuba … 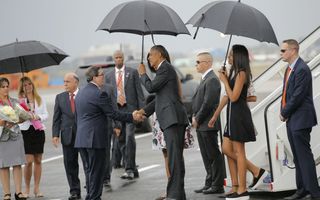 I am generally in favor of the policy of an opening to Cuba, but …

For those of you who are not acquainted with the universally accepted standards of diplomatic and government to government courtesy, a visiting official should be met at the point of debarkation by his/her counterpart.  To do less than that is understood to be a gesture of disrespect.

And then there was the moment in which Raul Castro attempted to hold Obama's arm up as though he were a prizefighter or some other ridiculous thing.

Does the Cuban government really want détente with the US?  If so they had better clean up their act.  pl

71 Responses to A studied insult in Cuba …