Addendum to A Quick Turnaround Assessment of the White House Intelligence Report Issued on April 11, 2017 About the Nerve Agent Attack in Khan Shaykhun, Syria by Theodore A. Postol

Professor Emeritus Theodore A. Postol has produced an addendum to his original critique of the flawed and deceptive propaganda churned out by the Trump White House and presented as if it was intelligence. If you take time to read Professor Postol's thoughtful analysis, the fraud being perpetrated by the Trump team will become quite clear. Theodore Postol is Professor Emeritus of Science, Technology, and National Security Policy at Massachusetts Institute of Technology. He is not some arm chair quarterback lacking in experience and judgment.

Let me give you the bottomline from his analysis–there is no credible evidence that the Government of Syria launched an aerial chemical weapons attack with Sarin on the people of Khan Shaykhun, Syria:

Professor Postol deserves your time and attention. He speaks with reason and logic. These are qualities that appear to be strangers to Donald Trump and his coterie of sychophants.

This addendum is a follow-up to the report A Quick Turnaround Assessment of the White House Intelligence Report Issued on April 11, 2017 about the Nerve Agent Attack in Khan Shaykhun, Syria. The full “Quick Turnaround” was written on the evening of April 11 after a quick review of the White House Intelligence Report (WHR) issued on the same day. This addendum provides data that unambiguously shows that the assumption in the WHR that there was no tampering with the alleged site of the sarin release is not correct. This egregious error raises questions about every other claim in the WHR.

As noted in the main body of my earlier report, the assumption in WHR that the site of the alleged sarin release had not been tampered with was totally unjustified and no competent intelligence analyst would have agreed that this assumption was valid. The implication of this observation is clear – the WHR was not reviewed and released by any competent intelligence expert unless they were motivated by factors other than concerns about the accuracy of the report.

The WHR also makes claims about “communications intercepts” which supposedly provide high confidence that the Syrian government was the source of the attack. There is no reason to believe that the veracity of this claim is any different from the now verified false claim that there was unambiguous evidence of a sarin release at the cited crater.

The United States is confident that the Syrian regime conducted a chemical weapons attack, using the nerve agent sarin. It also contains additional assertions that were key elements for underpinning its claim of a high confidence assessment:

The evidence that unambiguously shows that the assumption that the sarin release crater was tampered with is contained in six photographs. . . .

Figure 1 shows a man standing in the alleged sarin-release crater. He is wearing a honeycomb facemask that is designed to filter small particles from the air. Other apparel on him is an open necked cloth shirt and what appear to be medical exam gloves.

Two other men are standing in front of him (on the left in the photograph) also wearing honeycomb facemask’s and medical exam gloves.

If there were any sarin present at this location when this photograph was taken everybody in the photograph would have received a lethal or debilitating dose of sarin.

The fact that these people were dressed so inadequately either suggests a complete ignorance of the basic measures needed to protect an individual from sarin poisoning, or that they knew that the site was not seriously contaminated.

This is the crater that is the centerpiece evidence provided in the WHR for a sarin attack delivered by a Syrian aircraft. 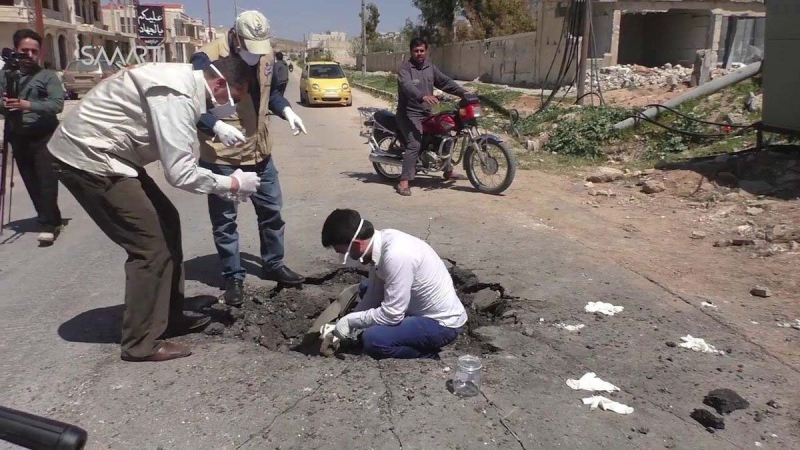 Figure 3 shows a photograph of the same street and crater when it is unoccupied by people. This photograph is taken from a slightly greater distance away from the crater but the bore site of the camera is in the same direction – North Northeast. 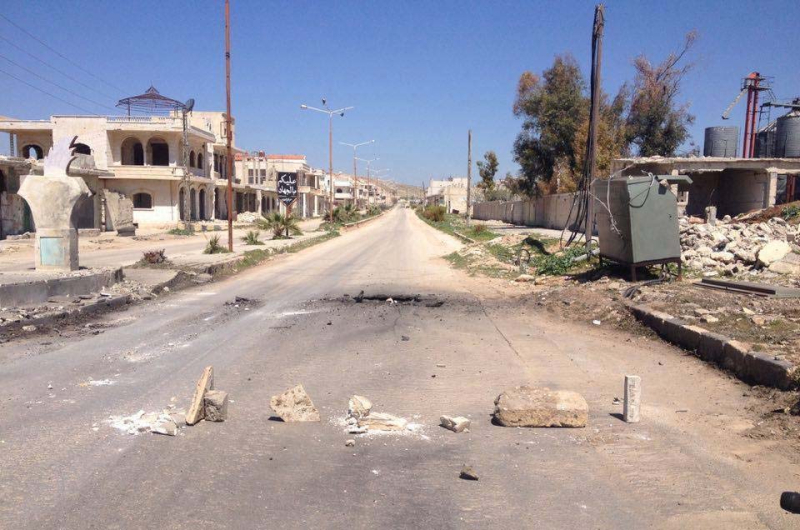 Figure 4 shows the crater, probably shortly after the tampering occurred that is documented in Figure 1.

The camera bore site is downward into the crater and its azimuth is roughly East Northeast. Note that the surgical gloves that can be seen on the ground behind the man in the crater in Figure 1 can be seen almost unmoved in the photograph shown in Figure 4. This strongly suggests that the photograph was taken a relatively short time after the tampering occurred. 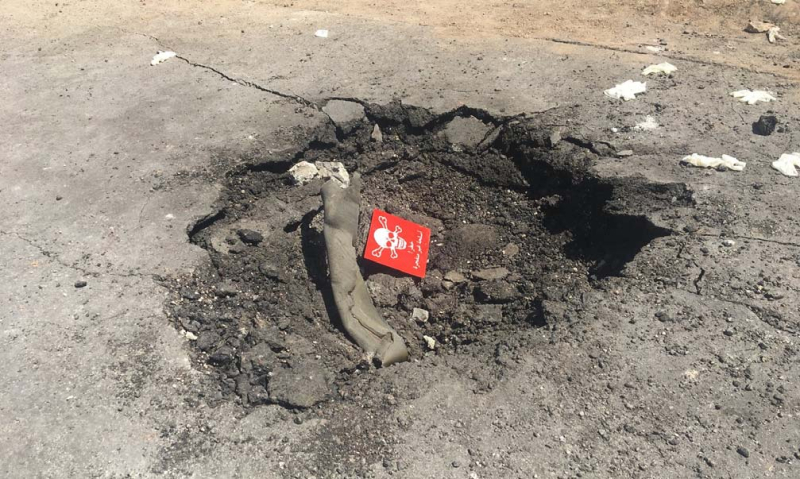 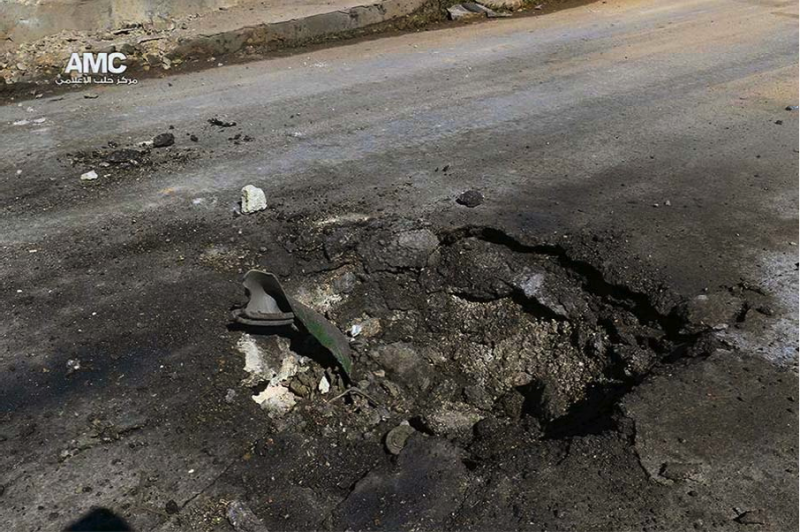 Figure 6 shows a photograph of the crater, probably taken at about the same time as the photo in Figure 5, with the azimuth of the bore site of the camera looking Southwest. 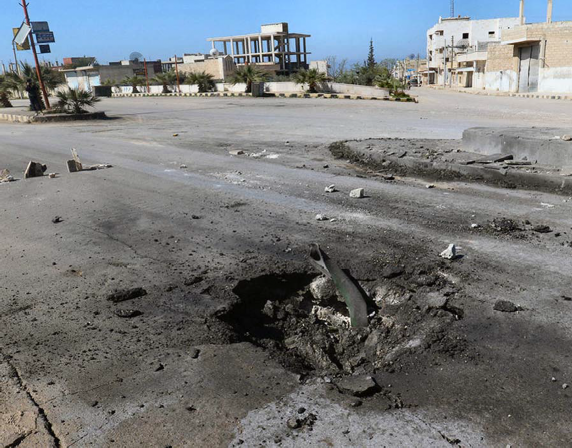 Summary and Conclusions from the Data

We repeat here a quote from the WHR:

An open source video also shows where we believe the chemical munition landed—not on a facility filled with weapons, but in the middle of a street in the northern section of Khan Shaykhun [Emphasis Added]. Commercial satellite imagery of that site from April 6, after the allegation, shows a crater in the road that corresponds to the open source video.

The data provided in these photographs make it clear that the WHR made no serious attempt to collect data that would support its “confident assessment” that there was data to unambiguously support a conclusion that the Syrian government executed a sarin attack as indicated by the location and characteristics of the crater.

This does not appear to be a mistake.

It is hard for me to believe that anybody competent could have been involved in producing the WHR report and the implications of such an obviously predetermined result strongly suggests that this report was not motivated by a serious analysis of any kind.

This finding is disturbing. It indicates that the WHR was probably a report purely aimed at justifying actions that were not supported by any legitimate intelligence.

This is not a unique situation. President George W. Bush has argued that he was misinformed about unambiguous evidence that Iraq was hiding a substantial amount of weapons of mass destruction. This false intelligence led to a US attack on Iraq that started a process that ultimately led to a political disintegration in the Middle East, which through a series of unpredicted events then led to the rise of the Islamic State.

On August 30, 2013, the White House produced a similarly false report about the nerve agent attack on August 21, 2013 in Damascus. This report also contained numerous intelligence claims that could not be true. An interview with President Obama published in The Atlantic in April 2016 indicates that Obama was initially told that there was solid intelligence that the Syrian government was responsible for the nerve agent attack of August 21, 2013 in Ghouta, Syria. Obama reported that he was later told that the intelligence was not solid by the then Director of National Intelligence, James Clapper.

Equally serious questions are raised about the abuse of intelligence findings by the incident in 2013. Questions that have not been answered about that incident is how the White House produced a false intelligence report with false claims that could obviously be identified by experts outside the White House and without access to classified information. There also needs to be an explanation of why this 2013 false report was not corrected. Secretary of State John Kerry emphatically testified before the Senate Foreign Relations Committee repeating information in this so-called un-equivocating report.

On August 30, 2013 Secretary of State Kerry made the following statement from the Treaty Room in the State Department:

Our intelligence community has carefully reviewed and re-reviewed information regarding this attack [Emphasis added], and I will tell you it has done so more than mindful of the Iraq experience. We will not repeat that moment. Accordingly, we have taken unprecedented steps to declassify and make facts available to people who can judge for themselves.

In this case, the president, supported by his staff, made a decision to launch 59 cruise missiles at a Syrian air base. This action was accompanied by serious risks of creating a confrontation with Russia, and also undermining cooperative efforts to win the war against the Islamic State.

Prior to these two inexplicable false intelligence reports, we had the incident in the Bush administration that led us to make decisions that we are still trying to deal with today.

I therefore conclude that there needs to be a comprehensive investigation of these events that have either misled people in the White House White House, or worse yet, been perpetrated by people seeking to force decisions that were not justified by the cited intelligence.

This is a serious matter and should not be allowed to continue.

This entry was posted in As The Borg Turns, Syria. Bookmark the permalink.

24 Responses to Addendum to A Quick Turnaround Assessment of the White House Intelligence Report Issued on April 11, 2017 About the Nerve Agent Attack in Khan Shaykhun, Syria by Theodore A. Postol