All in the Morning Paper – TTG 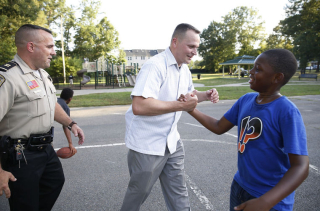 Chris Cameron was all set for a dinner engagement with some friends Friday evening when he stopped by the basketball courts in Olde Forge subdivision. After several impromptu games with some neighborhood kids and other members of the Stafford Sheriff’s Office, the sweaty detective decided he’d better clean up before continuing on to dinner.

Cameron, who earned the nickname “Officer Swish” from the kids after sinking a few baskets, was one of about a dozen members of the Sheriff’s Office who showed up in Olde Forge for a gathering arranged by subdivision resident Kathleen Wright. “When the community reaches out, the least we can do is to extend our hand back,” Cameron said. “Besides, I had a lot of fun today.”

Wright, 29, who has lived in Olde Forge for two years, said she came up with the idea for the gathering in response to the recent nationally publicized police-involved shootings, which continued over the weekend with the killings of three officers in Baton Rouge, La. She decided it would be a good thing to encourage more deputies and residents to get to know each other on a personal basis. (Keith Epps/Free Lance-Star)

This is why I like reading my local paper. There is plenty of good news, as well as thought provoking news, to balance the ever present bad news. And stories like this certainly increase this old New England Yankee’s pride in his Virginia home. The only sour note was when someone from the HOA showed up to complain about the lack of prior HOA permission to hold the ice cream social. These HOA types can be such dicks.

I have always been impressed by our Stafford County Sheriffs. They look sharp. They act professionally and courteously. SWMBO and I have always noticed that they invariably catch the bad guys who pass through our county. I’m convinced this is primarily due to the character and efforts of our recently retired, long time Sheriff Charles Jett. He’s a life long Stafford resident who aggressively sought to bring his department closer to the community it served. His predecessors were no slacks either. This is a home grown sheriff’s department… the best kind of law enforcement.

In other news, today’s Free Lance-Star included an AP story about the Nice attacker being recruited by an Algerian IS member only two weeks ago. So, if this guy’s uncle is to be believed, it wasn’t self-radicalization and it wasn’t an angry, depressed loser acting out. It was a damned effective IS “case officer” who spotted, assessed, recruited, trained and tasked his agent. All this in a few weeks. Stopping these people is going to be tough. Certainly doable, but tough.

This entry was posted in Current Affairs, TTG, Whatever. Bookmark the permalink.

49 Responses to All in the Morning Paper – TTG