An Iranian Naval Base in Syria? – TTG 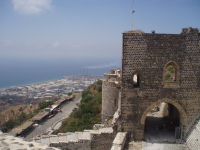 Elijah J. Magnier wrote an excellent review of the Syrian situation in his piece, "The roles of the US, Russia, Turkey, Iran and Israel in Syria: moving towards the end of the war." I heartedly recommend it. Within that piece is the following passage.

“Today, it is obvious that the Iranian strategy prevailed over that of Saudi Arabia and Qatar in Syria and managed to sustain a friendly government in Syria. Iran is also playing a positive role in the rapprochement between Baghdad and Damascus, resulting in military collaboration and the air bombing of ISIS targets by the Iraqi Air Force in Syria.

Moreover, there is an on-going discussion between Damascus and Tehran for the construction of an Iranian naval base in the oil terminal port of Banias, 55 km from Latakia. If realized (it may take few years before it becomes operational) it will boost the crippled Syrian economy. Throughout the years of war, Iran has been supplying Syria with oil, mainly when the jihadists of ISIS and Al-Qaeda controlled the northern eastern oil fields.”  (elihjm.wordpress.com)

I seriously doubt this proposed Iranian port facility will be anything like the Russian facility at Tartus. The Russians signed an agreement with Damascus in January to give Russia sovereignty over their port facilities at Tartus for 49 years. This sounds a lot like the old agreement with Ukraine over Sevastopol. They plan on dredging the port and constructing floating docks to berth eleven ships. That will be quite a base. The port facility at Banias will necessarily be much smaller, but I wonder if that agreement will be on the same terms as the Tartus agreement.

Only two days ago, The Fars News Agency reported that the IRGC Deputy Commander for political affairs Brigadier General Rasul Sanayee Rad denied Iran had any plans for a naval port facility at Banias. He was quoted as saying, “Our presence in Syria consists in the presence of military advisers at the request of the Syrian government. We do not plan to create a military base in the Syrian province of Latakia. Such an atmosphere is being formed to destabilize the situation in the region and create disagreements between countries.” Perhaps the Brigadier General left himself some wiggle room in denying the creation of a military base rather than a port facility.

The Israelis certainly believe the rumors of an Iranian naval base at Banias. Seems this was the prime reason for Netanyahu’s recent pilgrimage to Moscow on 9 March to talk with Putin. Netanyahu took his head of military intelligence, Major General Herzi Halevi, with him to help get his message across.

"In a meeting with Putin in Moscow, Netanyahu said Persia had made “an attempt to destroy the Jewish people that did not succeed” some 2,500 years ago, an event commemorated through the Jewish holiday of Purim, which Israel will celebrate starting Saturday night and lasting in some places until Monday.

“Today there is an attempt by Persia’s heir, Iran, to destroy the state of the Jews,” Netanyahu said. “They say this as clearly as possible and inscribe it on their ballistic missiles.”

Adopting a conciliatory tone, Putin said that the events described by Netanyahu had taken place “in the fifth century BCE.”

“We now live in a different world. Let us talk about that now,” Putin said."  (Times of Israel)

I seriously doubt Bibi’s silver tongue made much of an impression on Vladimir Vladimirovich. This is a far different world today than it was in the fifth century BC… or for that matter, a far different world than it was a year ago. Bibi should be quivering in his boots at the prospects of what his world will look like a year or two from now. I get the feeling Putin left Netanyahu with the same stark message that Walter White gave his wife.

“I am not in danger, Skyler. I am the danger! A guy opens his door and gets shot and you think that of me? No. I am the one who knocks!”

My thanks to Mathew and BraveNewWorld for pointing out this news in comments they made earlier today. And my thanks to the chairman of the board for that fine song. For some reason the thought of an Iranian port on the Mediterranean just brought that song to mind.

This entry was posted in Iran, Israel, Russia, Syria, TTG. Bookmark the permalink.

46 Responses to An Iranian Naval Base in Syria? – TTG