Posted on February 9, 2017 by Andrei Martyanov 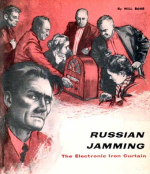 In October 2015 I put up a post largely about the Richag-AV and Krasukha-4 jamming systems then appearing with the Russian forces moving into Syria. It sparked a good discussion that cut through a lot of the techno-hype. One thing that became clear was that Russia developed and employed a broad family of radio-electronic combat (REC) technologies. Another point made was that these jamming technologies do not form an impenetrable force field. They work together as a “system of systems” to create an extremely hostile electro-magnetic environment for enemy weapons and surveillance systems. It’s not voodoo magic.

As a review of this subject, South Front put out an excellent summary of Russian REC capabilities. Although the article has a sensational title, “Ultra-Secret Weapon that Allows Russia to Assume His Supremacy in Electronic War in Syria” and it has been translated from Romanian to French and then to English, it is both readable and informative.

To continue the review, I took a look at some of the stories out there about the Cook/Su-24 incident. They run the gamut. A lot of the stories seem to conflate two different ECM systems. The Su-24 accounts from the Cook describe a single, basket-like pod under the belly of the fighter-bomber. Other stories describe the Khibiny as torpedo-like pods attached to the wing tips of many of the newer generation Russian aircraft, but not the Su-24. The Su-24 mounted system supposedly shut down, degraded or jammed the Aegis radars and/or fire control systems, but not the engines of the Cook. The wing tip mounted Khibiny system mounted on newer Russian aircraft is said to jam the ability of missiles to lock on and hit the aircraft. Sounds like two different ECM systems to me.

Another ECM incident involved a drone flown out of Syria towards Israel. The drone "deflected" two Iron Dome missiles and one missile fired by an Israeli F-16. This last incident is from a blog by Brad Cabana, a Canadian who posted reliable info during the louder parts of the war in Ukraine along with a thought provoking story of an incident surrounding the coup attempt in Turkey.

“In fact, Erdogan was scheduled to meet in Moscow with Russian President Putin just two days before the coup. However, all that came to a sudden end when Erdogan was spirited out of his vacation home just prior to an attempt on his life by a platoon of Turkish special forces. Somehow he had gotten wind of it, boarded his jet, and jettisoned off toward Turkey's capital. While enroute to the capital his plane was "locked onto" by two Turkish F-16's. Despite locking onto Erdogan's jet the Turkish fighter pilots could not fire and bring it down – for whatever reason. The bottom line is that al the evidence points toward a very important Russian intervention in the coup – to stop it that is. It appears that Russian intelligence intercepted the coup plotter's communications and plans, alerted Erdogan in advance, and saving his life in the process. It likely also proved very clearly to Erdogan who his friends were, and who they were not. In any case, the mysterious escape from the lethal missiles of those two Turkish F-16s is really what this article is about.

Funny enough, Erdogan's saving grace seems to be a part of another trend that has raised its head for at least the last few years. Simply put, the Russians have developed technology that renders all missile systems, nuclear or conventional, useless. In November, 2014 the first high profile incident occurred when a Russian SU-24 fighter bomber shut down all systems on the USS Donald Cook in the Black Sea. The only armament the plane carried was a small basket – an important little basket known as "Khibiny" – perhaps named after the Russian mountain of the same name. In any case, the entire state-of-the-art destroyer was rendered unable to defend itself while the SU-24 flew eleven simulated bombing runs over it before flying off. The Cook's Aegis system (most modern US defence system) was shut down completely.

Then, just three weeks ago a military drone entered Israeli airspace from Syria. The Israeli military fired two Patriot missiles at the drone, but the deadly accurate missiles could not hit the slow and plodding drone. Then an Israeli fighter pilot fired an air-to-air missile at the drone, but the missile would not strike it. It appears quite obvious that the Russian drone had on board a system similar to the Khibiny electronic warfare device that shut down the Cook. However, this system appears to not jam the firing systems, but just the missiles themselves. That would be a variant of the system and essentially render anti-aircraft systems and fighter jets obsolete. It seems clear the Russians used the air-tight "Iron Dome" Israeli anti-missile system as a test for this technology. Not a bad choice considering Israel's small land mass and therefore concentrated air defence systems. Or, in other words, no better place to test it in the world.” (Rock Solid Politics)

Cabana’s account of Erdogan owing his life to Russian ECM is interesting, but I haven’t found any other accounts of the incident. It might be true. It might be myth. Perhaps some of our august fellow correspondents can shed some light on this story.

I did find several other references to this last incident that corroborate Brad Cabana’s account. This sounds like a well planned field test of a Russian ECM system. I’m sure there were some Russian REC technicians shouting “Eureka” at the results of this experiment. I’m also pretty damned sure there were a lot of Israeli military officers and politicians crying “Ooooh Shiiit! We’re scrooowed!” It doesn’t take much imagination to understand the ramifications of just the possibility of such a lightweight, low power ECM becoming available to Hezbollah missile forces.

This entry was posted in Israel, Russia, Syria, TTG. Bookmark the permalink.