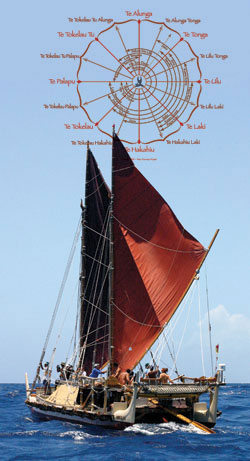 “On June 4, 1976, the Hokulea, a double-hulled sailing canoe of ancient design, glided into Papeete Harbor in Tahiti, greeted ecstatically by a crowd of 17,000 — more than half the island’s population. For the first time in six centuries, a traditional Polynesian sailing vessel had made the voyage from Hawaii to Tahiti, covering more than 2,700 miles without instruments.

For Ben Finney, an anthropologist at the University of Hawaii, it was sweet vindication. In an effort to prove that the settlement of Polynesia came about through deliberate exploration, rather than aimless drifting — the so-called accidental settlement hypothesis — he oversaw the construction of a 62-foot double canoe based on 18th-century illustrations made by members of Capt. James Cook’s crew.

He then found a master navigator from the Caroline Islands, Mau Piailug, who was capable of guiding the Hokulea (the name means “Star of Joy”) in the age-old way: using the rising points of the stars, supplemented by observations of the sun, the moon and ocean swells, as a natural compass.

Thirty-four days after leaving Honolua Bay, in Maui, on May 1, the Hokulea reached its destination, affirming the navigational expertise of the ancient Polynesians and throwing additional cold water on Thor Heyerdahl’s conjecture that settlers had come from South America, a theory he hoped to prove in his famous 1947 voyage aboard the raft Kon-Tiki.”  (NYT)

I was always enamored of the Hokule’a. I first saw her in the Ala Wai Harbor near the Hale Koa Hotel in Honolulu around Christmas in 1977. She sat in the water all alone. It was just me and her… love at first sight. I was heart broken when I missed her arrival at Alexandria, Virginia last May. This port call was part of her three year circumnavigation of the earth tour. Perhaps some day we will meet again. I have kept the knowledge of this love affair from SWMBO. She thinks we’re just friends.

I have seen many recreated sailing vessels. Most have auxiliary engines and modern navigational equipment. Not the Hokule’a. She relies on the wind and the stars as well as the sun, moon and ocean wave patterns to reach her destination. That is special. Ben Finney left quite a legacy in the Hokule’a and everything she stands for.

P.S. – My profound thanks to Colonel Lang for allowing me to indulge my occasional off-the-wall thoughts such as this.