BLM Chaos and the Need for History by Larry C Johnson

Posted on September 6, 2020 by Larry Johnson 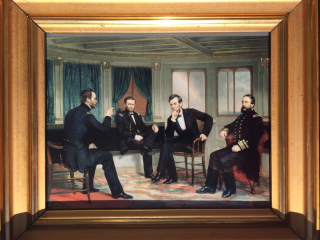 Put succinctly–if you can’t learn or won’t learn from history you are in a heap of trouble. Count me as an optimist who believes fervently that past events have bits of wisdom and insight relevant to modern life.

So let us look to the life of Ulysses S. Grant, the second four star General of the Army after George Washington and the 18th President of the United States. The superficial and uninformed version of “Sam” Grant’s legacy is built around the meme of drunkenness, corruption and butchery. But that account is unfair and grossly misleading. Grant, along with Abraham Lincoln, played the decisive role in bringing former slaves into the U.S. military and using the power of the Federal Government to combat the racial jihad unleashed against black Americans in the wake of the Civil War by unrepentant Southern racists.

Anyone who accuses America of systemic racism betrays him or herself as inexcusably ignorant. There is no room for middle ground on this. The facts of history condemn their advocacy of this nonsense. Yes, horrific examples of racist conduct, including rape and murder of black men and women, tattoo parts of the tapestry of American life, telling one tragic tale. But these accounts are counter balanced by heroic deeds from true patriots unwilling to ignore or tolerate those who barbarically attacked people because of the color of one’s skin.

While it is true that Abraham Lincoln began his Presidency in 1861 ambivalent about eliminating slavery and preserving the Union at all cost, he quit equivocating in September 1862 following the Union’s bloody victory over Robert E. Lee’s Army of Northern Virginia at Antietam (aka Sharpsburg) and embraced freeing the slaves in the south as an essential policy of his Government and announced the Emancipation Proclamation. It took effect on January 1, 1863 and within months former slaves were flocking to Union lines and presenting themselves to bewildered Union Generals.

In early March 1863, then General In Chief of the Union Armies, Henry Halleck, issued an order allowing Union Generals to arm the freed slaves. Ulysses S. Grant, who commanded the Army of Tennessee, was one of the first to enthusiastically embrace the order:

“At least three of my Army Corps Commanders take hold of the new policy of arming the negroes and using them against the rebels with a will . . . You may rely on my carrying out any policy ordered by proper authority to the best of my ability.”

Ron Chernow’s account of General Grant’s implementation of the Emancipation Proclamation is profoundly relevant in light of many current claims attempting to paint the United States and all Caucasians as inveterate racists (see Chapter 13, GRANT by Ron Chernow):

In late March, Lincoln had dispatched Brigadier General Lorenzo Thomas, adjutant general of the U.S. Army, to confer with Grant about the plight of liberated slaves—the so-called freed people—and aid the recruitment of black troops, a policy that formed a natural sequel to the Emancipation Proclamation. . . .On April 11, when he arrived in camp, he was bowled over “by Grant and soon confessed himself “a Grant man all over.”60 In cobbling together black regiments, Thomas displayed a crusading style, delivering rousing speeches to counter deeply rooted racial prejudice endemic in the northern army. The bigotry was so ingrained that one Ohio soldier warned northern soldiers “would lay down their arms and unbuckle their swords” if Washington persisted in arming blacks.61 By year end, Thomas had plucked twenty thousand young black men from contraband camps in the Mississippi Valley and absorbed them into African American regiments. Grant placed the full weight of his prestige into coaxing his commanders to flesh out these new regiments.

All the while, Grant maintained his enthusiastic backing of Chaplain John Eaton, the general superintendent in the Mississippi Valley, who provided education, shelter, medical care, and employment to people in contraband camps, where disease and despair proliferated and mortality rates often ran high. . . .

“Just how much Grant would support the newly emancipated slaves became evident at a fertile spot called Davis Bend, located on a Mississippi River peninsula, about twenty-five miles below Vicksburg. Jefferson Davis “and his rich brother Joseph had owned huge slave plantations there. When Joseph fled in 1862, his slaves invaded the mansion house and divided clothing and furniture among themselves. Even before Union troops came on the scene, the onetime slaves already operated the plantation. Grant spied a prime opportunity to create a model community for blacks that would showcase their industry and self-reliance. As Eaton recalled, “It was General Grant’s desire that these plantations should be occupied by the freedmen, and, to quote his own words, ‘become a Negro paradise.’”67 Grant wasn’t responding to a Washington directive but undertook this on his own initiative.

The end of the Civil War in April of 1865 did not mark the denouement for slavery and racism. Many Southern leaders deluded themselves into believing they had won the war and furiously resisted treating former slaves as fellow citizens and Americans. It is true that the original version of the Ku Klux Klan rose up in the immediate aftermath of the Civil War as a secret marauding army, headed by Nathan Bedford Forrest. This secret cabal claimed the lives of thousands of black Americans and white Republicans who had gone south to work on behalf of former slaves.

Yet, in the midst of this new horror for the African American community, General Grant and then President Grant took decisive to fight for the rights of the former slaves. As General of the Army, Grant authorized martial law in Southern states and removed from office Southern Democrat politicians who had presided over riots and murders of black citizens.

When Grant became President[–following the disgraceful reign of the unrepentant racist Andrew Johnson–he moved symbolically and substantively to ensure the equal treatment of black Americans under the law (See Chernow, Chapter 29):

Grant appointed Ebenezer D. Bassett as minister to Haiti, making him the first African American diplomat in American history. The grandson of a slave, the Yale-educated Bassett had been principal of the Philadelphia Colored High School, where he joined with Frederick Douglass in enlisting thirteen black regiments during the war. In soliciting Grant for the job, Bassett wrote that his appointment “as a representative colored man . . . would be hailed . . . by recently enfranchised colored citizens, as a marked recognition of our new condition in the Republic and an auspicious token of our great future.”34 Frederick Douglass, who had entertained hopes for the Haitian post, graciously conceded defeat. “Your appointment,” he told Bassett, “is a grand achievement for yourself and for our whole people.”35 Two years later “Grant expanded this precedent by naming James Milton Turner as minister to Liberia. ”

“Grant’s efforts transcended high-profile appointments as he named a record number of ordinary blacks to positions during his first term in office.37 During the 1872 presidential campaign, Frederick Douglass toted up black employees sprinkled throughout the federal bureaucracy, citing customs collectors, internal revenue assessors, postmasters, clerks, and messengers, and was simply staggered by their numbers: “In one Department at Washington I found 249, and many more holding important positions in its service in different parts of the country.”38 Grant integrated the executive mansion, appointing Albert Hawkins as his stable chief and coachman; he also cared for a Grant menagerie that included dogs, gamecocks, and a raucous parrot. For his personal servants, Grant picked George W. “Bill” Barnes and John Henry Whitlow. The able Barnes had been a runaway slave who showed up when Grant was in Cairo in 1861 and had turned himself into an indispensable valet.”

Grant took on the Klan with U.S. Attorney General, Amos Akerman, as his point man. Akerman had fought for the South and was a Colonel in the Confederate Army. But that did not make him a racist. While in office as the U.S. Attorney General, he fought doggedly for the rights of black Americans and pursued the Ku Klux Klan without mercy (see Chernow, Chapter 32):

“On October 12, the anti-Klan assault entered a new phase when Grant, at Akerman’s bidding, issued a proclamation calling upon “combinations and conspiracies” in nine South Carolina counties to disperse and retire peacefully to their homes within five days.93 Five days later, when the groups did not disarm, Grant suspended habeas corpus there. Akerman explained to Grant the legal rationale for doing so: it was impossible to prosecute Klan members if witnesses dreaded reprisals. With habeas corpus suspended, those threatening reprisals could be held in custody long enough to protect witnesses and obtain convictions. Akerman greeted Grant’s move, saying blacks can “sleep at home now.”94

By late November, he informed the cabinet that  “he had taken two thousand prisoners in South Carolina for violating the Ku Klux Klan Act.

Under Akerman’s inspired leadership, federal grand juries, many interracial, brought 3,384 indictments against the KKK, resulting in 1,143 convictions.95 The conviction rate was even better than it sounded. The federal court system was burdened with cases and many federal judges, appointed before Grant, didn’t sympathize with the anti-Klan crusade. Furthermore, the act that created the Department of Justice had reduced the federal legal staff by a third and curbed its ability to hire outside lawyers as needed. With witnesses offered protection, Klansmen began to name other Klansmen, stripping off the secret veil that cloaked their activities. Many Klansmen, facing arrest, fled their states. Several hundred pleaded guilty in exchange for suspended or lenient sentences. Sixty-five Klansmen wound up in the federal penitentiary in Albany, New York. The goal was not mass incarceration but restoring law and order. To his district attorneys, Akerman made plain that more than convictions were at stake: “If you cannot convict, you, at least, can expose, and ultimately such exposures will make the community ashamed of shielding the crime.”

With the 2020 Presidential election drawing nearer, the Democrats have gone into desperation mode to portray Donald Trump as the reincarnation of the Klan’s first leader, Nathan Bedford Forrest. The Democrats want you to ignore the tangible facts that under Trump’s economic stewardship the unemployment rate for African Americans fell to historical lows. The Democrats want you to ignore the fact that Donald Trump, not Joe Biden or Barack Obama, pushed for and signed off on legislation that turned back the punitive criminal penalties that unfairly and disproportionately hit black Americans. And Democrats especially want you to forget that it was Donald Trump who pardoned Alice Johnson (no relation) from an excessively punitive prision term and reunited her with her children and grand children.

Most importantly, the Democrats want you to ignore the hellish conditions that blacks inhabit in Democrat ruled cities. The parallels of these Democrat controlled urban wastelands with the Demcrat run plantations that enslaved blacks in the aftermath of the Civil War is eerie and haunting.

Let’s face it. Donald Trump has now brought the Republican party back to its Civil War roots. In word and in deed it is acting to ensure equality and freedom for black Americans. The ghosts of Lincoln and Grant must be rooting for him.