China journeys to the dark side of the Moon – TTG

Posted on December 8, 2018 by Andrei Martyanov 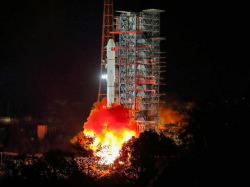 The first-ever surface mission to the far side of the moon is underway. China's robotic Chang'e 4 spacecraft streaked away from Earth today (Dec. 7), launching atop a Long March 3B rocket from the Xichang Satellite Launch Center at about 1:23 p.m. EST (1823 GMT; 2:23 a.m. on Dec. 8 local China time).

If all goes according to plan, Chang'e 4 will make history's first landing on the lunar far side sometime in early January. The mission, which consists of a stationary lander and a rover, will perform a variety of science work and plant a flag for humanity in a region that remains largely unexplored to date.

The moon is tidally locked to Earth, meaning the natural satellite takes about the same amount of time to spin once on its axis as it does to orbit our planet. So, here on Earth, we always see the same face of our cosmic neighbor. That would be the near side. The far side remains forever out of view, and that explains why this obscured surface has yet to welcome a robotic visitor. Communicating with a far-side lander or rover is difficult, because the entirety of the moon's solid, rocky body would block direct signals traveling to and fro.

To solve this problem, China launched a satellite called Quegiao this past May. Queqiao has set up shop at the Earth-moon Lagrange point 2, a gravitationally stable spot beyond the moon from which the satellite will be able to relay communications between mission control and Chang'e 4.

The spacecraft's signals will likely be coming from the floor of Von Kármán Crater, a 115-mile-wide (186 kilometers) hole in the ground that's the mission's expected landing site. Von Kármán is part of the South Pole-Aitken Basin, one of the biggest impact features in the solar system; it spans a whopping 1,600 miles (2,500 km) from rim to rim.  (space.com)

I know. Far side is far more accurate than dark side. Both sides of the Moon get equal amounts of sunlight, but I prefer dark side… Pink Floyd and all. It goes well with the Chinese reference to legends in their lunar exploration program. Chang'e is a Moon goddess. Queqiao is the magpie bridge from a very appropriate legend. My favorite is Yutu or Jade Rabbit, the Chinese rabbit in the Moon. Yutu is the lunar rover that will roam the dark side of the Moon if all goes as planned.

A lot’s been happening in space lately. We’ve heard the howling of the Martian winds. SpaceX launched a slew of communication satellites on one of their well used rockets, as well as sending a cargo ship to the ISS with Christmas dinner aboard. And Roscosmos sent the Soyuz MS-11 to the ISS with a Russian cosmonaut along with an American and a Canadian astronaut, just in time for that Christmas dinner.

The Planetary Society has an excellent article on the Chinese lunar missions written by Long Xiao, a planetary geoscientist at the China University of Geosciences (Wuhan) and the Macau University of Science and Technology.

This entry was posted in China, Space, TTG. Bookmark the permalink.