I am the choir shouting Amen! to Colonel Lang's latest missive on the matter of Classification and Clearance. I want to drill down on the Secrecy agreement that John Brennan and I each signed when we joined the CIA. Read it for yourself: 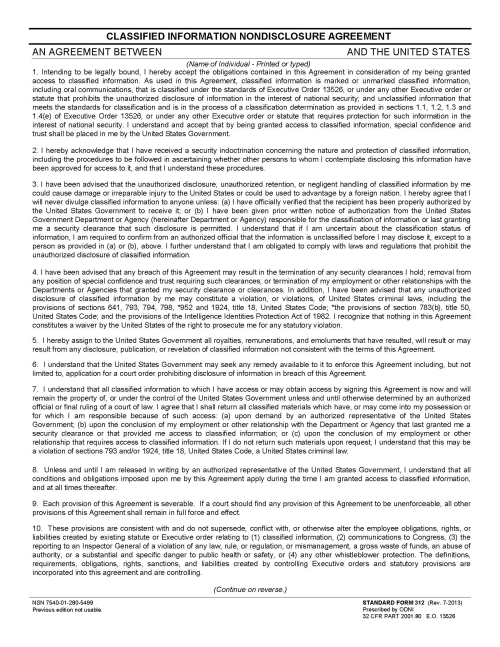 So let's start with some simple facts.

First, no person has a Constitutional right to a clearance. That includes John Brennan and Donald Trump.

Second, once you are granted access to classified material you accept limitations on what you can say and write. In other words, once you hold clearances you surrender and curtail normal first Amendment rights. No one has birth right to go on TV or pontificate in the opinion pages of newspapers by virtue of having held a security clearance. Just the opposite. The agency or agencies you worked for while holding a clearance get to have a say in what you say and write. And those agencies are under the authority of the President.

Third, I want you to think back on every book written by former members of the CIA and other agencies in the intelligence community. In most cases (I am thinking of Gary Berntsen's JAWBREAKER and Valerie Plame's FAIR GAME), major portions of the book are blacked out. You cannot read what they wrote because the CIA has deemed their material to be classified. They have no protect Constitutional right to write what they want. I know that in both of those books there are sections blacked out because they are embarrassing to the CIA, not because they contain classified information.

Fourth, so far no President has required former Intelligence Community talking heads to get prior clearance on TV and radio appearances. The condition that written pieces get prior clearance has been routinely applied by the CIA and backed up by the courts. What would happen if Donald Trump declared that all public statements must have prior approval? Certainly there would be an outcry among the Deep State clique but such restriction would be entirely consistent with the Secrecy Agreement.

Which brings me back to the deranged John Brennan. Brennan has an established history of incompetence and lying. For example, as Chief of Station in Saudi Arabia before the bombing of Khobar Towers in June of 1996, Brennan refused to allow case officers at the station to collect information on terrorism. That was an Al Qaeda attack (which therefore implicate Saudi interests), but Brennan helped push the lie that it was Iran and Hezbollah.

Brennan is now in full throated insistence that Russia meddled in the 2016 election and that Trump, by virtue of the Russian actions, became President. This shows you what a total dumb ass Brennan is. He apparently wants to forget that he was the CIA Director until January 2017. Therefore, he was responsible for warning the President and the country about the nefarious activities of Putin. But Brennan did not do this. He played the political game.

Moon of Alabama has a great take on Brennan's boneheaded play:

“Director Brennan’s recent statements purport to know as fact that the Trump campaign colluded with a foreign power. If Director Brennan’s statement is based on intelligence he received while still leading the CIA, why didn’t he include it in the Intelligence Community Assessment released in 2017? If his statement is based on intelligence he has seen since leaving office, it constitutes an intelligence breach. If he has some other personal knowledge of or evidence of collusion, it should be disclosed to the Special Counsel, not The New York Times.

“If, however, Director Brennan’s statement is purely political and based on conjecture, the president has full authority to revoke his security clearance as head of the Executive Branch.”

I think Trump correctly senses that he need only keep feeding rope to Brennan and that Brennan will hang himself in a spectacular fashion. Meanwhile, Brennan continues to shoot off his big, stupid mouth without being stopped by the President. Certainly does not strike me as an infringement of his First Amendment rights.

This entry was posted in Borg Wars, Russia. Bookmark the permalink.