Posted on November 5, 2017 by Balint Somkuti

I admit upfront that the title of my piece is obscure except for the most ardent film buffs. What does Donna Brazil have to do with "Sofia?" My Sofia refers to the character Oprah Winfrey played in the Steven Spielberg movie, The Color Purple. Sofia was a bad ass black woman who would not take a beating, willfully, from anyone, especially men.

Sofia is the type of assertive woman that Celie is not. She won’t back down from a fight and if anybody picks on her, she beats them twice as hard as they give it to her. Celie admires this quality, but often times it just causes Sofia trouble. Her assertive nature tends to rub white people the wrong way.

In addition to her assertiveness, Sofia is also extremely honest and willing to act on her emotions. When she struggles, she says so. When somebody hurts her, she says so. When she’s mad, she acts on it. This is also, of course, what gets her in trouble. Celie never emulates Sofia, but Sofia serves as a visible reminder that Celie doesn’t have to take everything lying down, she can learn to stand up and fight.

In light of Donna Brazil's verbal and written assault on the Clinton Empire, I can think of no better character example of her actions than that of Sofia. First, Donna and Sofia look alike. Here's Oprah as Sofia: 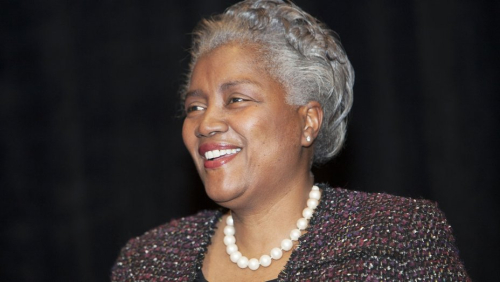 Something certainly has riled Ms. Donna up and steeled her for brawling with the Clinton machine. She does not appear willing to back down. She is trashing Hillary as an absentee candidate who, per Donna/Sofia, operated on cruise control and she also takes shots at President Too Cool for School Obama for his complete disinterest in raising money for the DNC. She, Ms. Donna, paints a picture of a dysfunctional clown show pretending to be a national political party with a purpose and sense of mission.

If you did not get a chance to see Donna today with George Stephanopoulos, here is the transcript.  The Democrats, believe it or not, are accusing Donna of collaborating with the Russians. Yep, she's now just another puppet of Putin:

STEPHANOPOULOS: Let's get some facts on the table first.

As DNC chair, you didn't have the power on your own to replace Hillary on the ticket?

BRAZILE: No. But as you well know, the charter of the DNC as well as the convention rules say that the chairperson, shall, in consultation with the leadership in congress and others, and so I had to put in on the the table, George, because I was under tremendous pressure after Secretary Clinton fainted to have a quote, unquote, plan B.

I didn't want a plan B. Plan A was great for me. I supported Hillary and I wanted her to win. But we were under pressure.

STEPHANOPOULOS: So how serious was this? You write that you got a call from Vice President Biden at the time. Did you mention this to the vice president?

I mean, look, everybody was called in to see, do you know anything? How is she doing? And of course my job at the time, George, was to reassure people, not just the vice president, but also reassure the Democratic Party, the members of party, that Hillary was doing fine and that she would resume her campaign the following week.

STEPHANOPOULOS: Do you still think that Biden and Booker would have won?

BRAZILE: Well, you know, I had a lot of other combinations. This was something you play out in your mind. But at the time, I was sitting next to Charlie Baker, who was her chief…

BRAZILE: That's right. And Charlie and I put down — we had a lot of rumors coming — I had the former chair of the DNC call me, Donald Fowler Jr. — I mean Senior — what are you doing?

Look, the bottom line is she — she resumed campaigning. I went on TV to say that the campaign was back on track.

STEPHANOPOULOS: As you can imagine, there's been quite a reaction to this, including this open letter from the Hillary for America 2016 team signed by about 100 people. They say they are shocked to learn that you were considering this. And they go on to say, "it is particularly troubling and puzzling that she would seemingly buy into false Russian fueled propaganda spread by the Russians and our opponent about our candidate's health.

BRAZILE: Well, George, at the time — like I said, I talked with Charlie Baker. But as it relates to that…

STEPHANOPOULOS: Did you mention this idea to him?

BRAZILE: No. I kept my own counsel. I'm the chair of the party, George, and I decided I wanted to be up front with someone inside the campaign. And Charlie was there sitting across from me.

But let me just address what my former colleagues, I wasn't a staff person. I did not work for the Hillary Clinton campaign. I was not on their daily strategy calls. I had nothing to do with their data analytics. I was the chair of Democratic National Committee. I was concerned about the entire party, not just the presidential, but the senatorial, congressional, and all of the other candidates.

STEPHANOPOULOS: From the sound of it, it sounds like you had a pretty dysfunctional relationship with the high command in Hillary's campaign. You even talk about telling them at some point I'm not patsy the slave?

I become chair and I'm trying to write a check for something. I raised the the money and they're like, you have got to get signed off from Brooklyn. I said Brooklyn? This wasn't a standard joint fundraising agreement. They had a memorandum of understanding. And I needed to break that, but in order to break it, I would cause a great commotion.

So, yeah, I'm not patsy the slave because I got sick and tired of people telling me how to spend the money when all I was trying to do — I wasn't getting a salary. I was basically volunteering my time. And what I was trying to do, George, was to increase the level of enthusiasm and passion for Hillary Clinton and the rest of the ticket all across the country.

STEPHANOPOULOS: They also take exception to your description of the campaign right now as an anti-septic, sterile campaign inside the headquarters. A lot of people saying that is not the campaign they knew.

BRAZILE: Well, you know what, they should take a page from Hillary's book. Take a look inside of what they did last year and then they should write their own book. Hillary wrote a book, which I enjoyed reading. It was part memoir, it was a history book. I loved reading her book. If they don't like my book, don't buy it.

But let me say this, I have every right as a former chair of the party — next year, I'll celebrate almost 50 years in American politics. The Democratic Party is 170 years old.

STEPHANOPOULOS: I get that. But how do you respond, it's not just the Clinton campaign. There's a lot of traffic on Twitter right now. I have gotten emails from Democrats.

STEPHANOPOULOS: Passionate Democrats who say they feel betrayed by all this. Any regrets?

BRAZILE: Do I regret taking on a job the second time in my life as chair of the party, cleaning up everyone's mess, taking all of the incoming, being unable to spend funds that I raised? Do I regret being on the road 100 percent of the time, being hacked by the Russians, being — being harassed, getting death threats? Do I regret any of that? George, was worse than Hurricane Katrina in terms of the emotional toll. But do I regret stranding up for what is right, helping Hillary Clinton, helping the Democratic Party?

And let me just say this, as somebody who went through the hacking experience, being able to tell the truth about what happened with the Russians, the attack on our government do I regret any of that? No. I wish I could have done more, George.

STEPHANOPOULOS: But do you think this helps for the book to come out?

BRAZILE: Well, George, I mean this is a lesson of 2016. If I released it next year, they would say, Donna, you're impacting our 2018. If I released it the following — Donna, you're impacting. George, for those who are telling the me to shut up, they told Hillary that a couple of months ago. You know what I tell them, go to hell. I'm going to tell my story. I'm going the tell my story, George.

Because this is a story of a young girl who started in American politics at the age of 9, who continues to fight each and every week of her life. I went down to Virginia last week, to kick off the canvassing campaign. Nobody paid me to do that. Nobody — I'm not on the payroll, George. I care about my country. I care about our democracy.

And I say go the hell because, why am I supposed to be the only person that is unable to tell my story?

STEPHANOPOULOS: Pretty clear you have no regrets at all right there.

I suppose Donna, deep in her soul, is ashamed of the role/roles she played in enabling the dysfunction that was Hillary Clinton. Passing her debate questions was wrong and probably helped Hillary a tad in besting Bernie the Socialist. But don't let the Clinton/Democrat establishment counter attack fool you. Hillary ran a crappy campaign. She clearly felt entitled to the title of President. All she had to do was show up. Donna's critique highlights the troubling fact that the Hillary campaign was a facade and a charade. There was no there there other than her claim, "I ain't Donald Trump."

One of the key takeaways from this latest episode of the Donna Brazil show is that the Democrats are still flogging the anti-Russian hysteria rather than accept the reality that the only person responsible for Hillary losing the Presidency is Hillary. As long as this state of denial persists the Democrats will continue to fail to adopt the reforms that would put them into a position to regain their political footing as a national force. They will remain divided and unfocused. That is good news for Trump. If the economy keeps growing and he stays out of new wars, the road for a second term should be smooth.

This entry was posted in As The Borg Turns, Politics. Bookmark the permalink.