Don’t even think about it – TTG

Posted on September 6, 2017 by Andrei Martyanov

Earlier this evening, Colonel Lang asked me a fairly simple question. “What would you say is the actual deployment ground force capability?”

Just from the top of my head, I gave the following response. “Since we're already committed in Iraq, Afghanistan and Syria, I doubt we can muster any sizable package for Korea. Maybe a few light brigades, but a heavy force would be damned difficult. And a heavy force is what's needed. I'm sure the 25th Infantry would be sent there first as was always the plan. I hope they bring plenty of shovels. They'll need them.”

I was in the 25th Infantry Division in the late ‘70s. Reinforcing Korea was our number one mission. To prepare we practiced strongpoint defense, withdrawal under pressure and breakout from encirclement. We carried more than our normal compliment of picks and shovels as we knew the holes we dug would save our lives. That’s what we anticipated… a forlorn hope.

A quick Google search confirmed my pessimism. The 2nd Infantry Division only has one armored brigade in country along with two MLRS battalions. The division’s two Stryker brigades are stationed at Fort Lewis. So just getting the 2nd to fighting strength requires the deployment of these two brigades across the Pacific along with their Strykers. 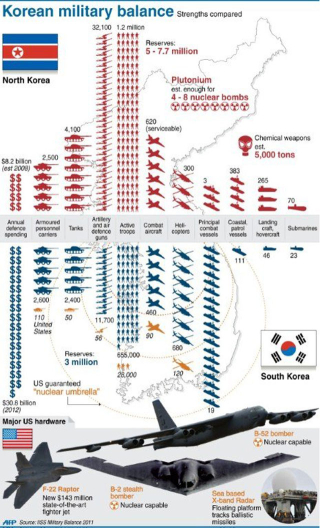 But the question of how fast we can move ground forces into Korea is moot. Take a good look at this chart. A ground war in Korea would be a war among Koreans. The ROK Army has over 600,000 active duty troops, around 5,000 tanks and AFVs and close to 8,000 pieces of towed artillery, self-propelled artillery and MLRS. Our troops would never amount to more than a drop in the bucket. No, don’t even think about that option.

This entry was posted in Korea, TTG. Bookmark the permalink.

39 Responses to Don’t even think about it – TTG