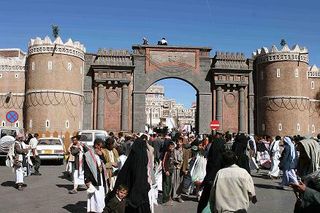 "Eighteen of the 19 US embassies and consulates that were closed in the Middle East and Africa over fears of attack will reopen on Sunday, according to the US state department.
The embassy in Sana'a, Yemen, will remain closed. The consulate in Lahore, Pakistan, which was closed on Thursday because of what officials say was a separate credible threat, is also not scheduled to reopen.
A state department spokeswoman, Jen Psaki, did not give a reason for the decision to reopen the 18 missions but cited "ongoing concerns about a threat stream indicating the potential for terrorist attacks emanating from al-Qaida in the Arabian Peninsula, or AQAP, for keeping the embassy in Sana'a closed."   The Guardian

The picture is of the "Gate of Yemen' in Sana'a.  Sana'a is a dangerous place, as is all of Yemen.  It was dangerous 30 years ago when I was the military attache there and it still is. The government's area of control never extends far outside the cities and the tribal warfare endemic to the country often comes to town.  When that situation is complicated by the presence of a small but active Sunni jihadi group (AQAP) it is understandable that the Sana'a embassy should be closed.  Perhaps they should close it permanently.  That embassy is an incident waiting to happen.

Nevertheless, the re-opening of all these facilities illustrates the hollowness of the hysterical reaction of the Obama administration in closing them.   Zawahiri sent a message to the AQAP leader exhorting him to action?  So what?

Shakespeare has Glendower say that he could summon spirits from the vasty deep, to which Hotspur responds, "but will they come?"  The same applies to Zawahiri.  He is hiding somewhere in Pakistan.  AQAP is far from Pakistan.  This message was the basis for closing all these facilities?  I think not.  Either the  government had better information that it does not want to admit to or the whole thing was a hysterical reaction to marginal intelligence complicated by a desire to justify NSA surveillance programs.

I vote for hysterical reaction.  pl

11 Responses to Embassy closure farce ends except in Yemen.