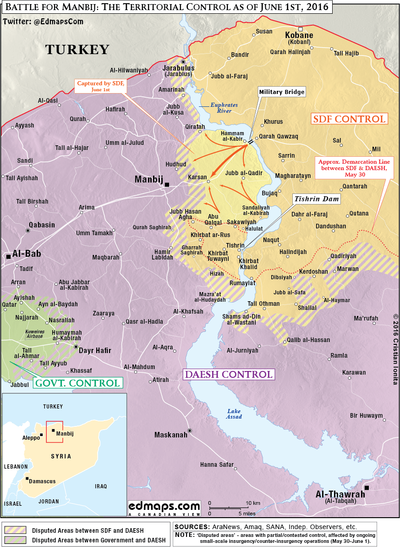 Thousands of U.S.-backed fighters in Syria are launching an offensive to capture from Islamic State a crucial swathe of northern Syria known as the Manbij pocket following weeks of quiet preparations, U.S. officials disclosed to Reuters. The operation, which only just started to get underway on Tuesday and could take weeks to complete, aims to choke off Islamic State's access to Syrian territory along the Turkish border that militants have long used as a logistics base for moving foreign fighters back and forth to Europe. "It's significant in that it's their last remaining funnel" to Europe, a U.S. military official said.

A small number of U.S. special operations forces will support the offensive on the ground, acting as advisors and staying some distance back from the front lines, the officials said, speaking on condition of anonymity to discuss military planning. "They'll be as close as they need to be for the (Syrian fighters) to complete the operation. But they will not engage in direct combat," the official said. (Reuters)

This YPG/SDF offensive expands the previously announced offensive moving towards Raqqa. I have no idea why Reuters calls it the Manbij pocket. It’s the main line of communications/supply between IS and Turkey. IMHO cutting this LOC should be a, if not the, primary offensive objective of both the R+6 and YPG/SDF coalitions. All else will follow.

In addition to expanding the Tishrin bridgehead, the YPG/SDF has crossed the Euphrates River some 25 miles north of Tishrin. This was done by ferrying men and equipment across the river and by repairing the damaged bridge at Qarah Qawzaq with a military pontoon bridge. My guess is that there were a couple of SF engineering sergeants involved in that operation. Judging by the map, the YPG/SDF has made a lot of progress from this new bridgehead. So much for Erdogan’s red line. The Kurds have crossed the Euphrates with U.S airpower and Special Forces advice and expertise. This has to infuriate Erdogan a lot more than seeing U.S. special operations forces wearing YPG and YPJ arm patches.

In deference to the sensitivities of our NATO ally, the U.S. is assuring Erdogan that the Arabs of the SDF comprise the majority of the offensive forces targeting Manbij and that the Kurds will not enter the city of Manbij itself. Yeah… right. The Kurds want to link up with their brothers to the West and I seriously doubt they are concerned about Erdogan’s hurt feelings. They are still better off staying out of the reach of Turkish artillery.

The map from edmaps.com also shows a lot of disputed areas reaching up to Jarabulus. This indicates a lot of skirmishing and raiding going on. I see the hand of my Green Beret bretheren in this as well.

As I have been saying all along, this is how the U.S. should be fighting the IS. Let the NCOs, warrant officers and company grade officers of U.S. Special Forces work with those willing to fight. Keep all the high muckety-mucks out of the AO. We wasted too much time and resources screwing the pooch with the unicorn army and the idiotic “Assad must go” nonsense. Once IS and its allies are defeated, the Kurds can negotiate their own accords with Damascus. I am convinced some federated arrangement would be beneficial to all Syrians.