Posted on February 26, 2014 by Andrei Martyanov 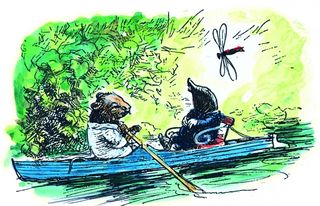 "Believe me, my young friend, there is nothing — absolutely nothing — half so much worth doing as simply messing about in boats."

Ratty is definitely on to something. To be on the water in any kind of craft can be therapeutic. IMHO the sound of the surf can only be equalled by the sound of the wind in the pines. Both together… heaven. You can’t buy that kind of therapy with a million dollars. One of the saddest things I often saw on the streets of D.C. was the herds of young, ambitious suits with ear buds in their ears, eyes and thumbs glued to their smartphones, totally oblivious to their surroundings. It is no wonder so much self serving and destructive idiocy is produced in Washington. As I have said for the last two last years, I think we deserve a break… or at least a little vicarious diversion from the madness that surrounds us.

Once again, I invite the SST Committee of Correspondence to follow this year's running of the Everglades Challenge which begins this Saturday morning. I discovered this event several years ago. It’s still on my bucket list, along with building the boat. The event is organized by a colorful group of adventurers who call themselves the Water Tribe. The Everglades Challenge is an unsupported, expedition style adventure race for kayaks, canoes, and small sailboats. It starts at Fort DeSoto in Saint Petersburg, Florida and ends at Key Largo. The distance is roughly 300 nautical miles depending on one's course selection. There is a time limit of eight days. Updates on the progress and tribulations of the participants will be posted on the Water Tribe forums. The boats are tracked by SPOT satellite. Their progress can be seen on this tracking map.

This year 140 boats will be taking up the challenge, including 26 mono hulled sailboats, the class that most interests me.  Most will probably not make it to Key Largo. Some won’t make it to Fort DeSoto. It’s been said that half the challenge is getting to the start. I believe it.

I will be following the progress of OffTheCharts and his son, Waverider, in their John Welsford designed SCAMP named Fat Bottom Girl. This is the first attempt for this father-son team and the second attempt for the SCAMP design. The first attempt in the EC2011 ended with SCAMP #4 stranded on the mud flats of Florida Bay only 35 miles from the finish. Such is life. It still beats working in D.C.

The SCAMP is a twelve foot sailing dinghy with a 100 square foot balanced lugsail. It’s become quite popular since its debut in EC2011. Over 250 sets of plans have been bought by builders and dreamers, spawning an active, worldwide community. A 69 year old retired gentleman, named Fred, living on the island of Panay in the Philippines built a SCAMP last year. He’s a boater, but not a sailor. He shared his trepidations about his lack of sailing skill and the fear of being swept out to the Sulu Sea with the SCAMP community. An experienced sailor penned a response that I found both practical in the near term and profound in the far term… as in a valuable life lesson.

"The old timers did it the same way us new timers do it, only we have more information. The art of seamanship is largely about situational awareness. First you want to learn how to sail your boat to get where you want to go in any wind direction. It looks like the wind will blow you toward shore so pick good days, tack out, half a mile is plenty. And sail on all points, like practicing a musical instrument… do it a lot until you are confident that you can do anything without having to think about it."

"While still close to home, learn the currents. When you are anchored, throw a block of wood into the water. Which way does it go? So now you are building information about what forces are acting on your boat and what you can expect your boat to do. The art of seamanship involves balancing the natural forces acting on you with what you can and cannot or don't want to do relative to those forces. You will begin to develop a sense of boundaries in different conditions. A key skill is to develop a habit of constant awareness of changing conditions. The boundaries will change as conditions change."

"You don't often think about this much detail in a power boat because you can make it do whatever you want. Don't let a motor give you false confidence. With a motor you will be tempted to push those boundaries. A motor is quite capable of taking you where you shouldn't be and leaving you there. Realize that a motor can fail and send you on a trip to Palawan, too. With a failed motor you are helpless, with sail you can still direct your boat."

"The thing I would want to be aware of is the current: if it flows westerly you still have 40 or so miles of opportunity to make a land fall before you pass Anini-y. Does the current sweep out counter-clockwise? If the current is easterly it will sweep you into the bottleneck at Iloilo, is that a good thing? The best source of information about local conditions is local fisherman. They go to sea in conditions that recreational boaters stay home in so they know the sea in all her moods. Remember that their experience is probably with power boats, so adjust accordingly. And like fisherman everywhere they are apt to yarn and exaggerate a bit. But they DO know the currents and what to expect in different conditions."

"Finally all of us who sail on the edge of a long trip to nowhere worry about what you are worrying about. That fear is always lurking in the back of your mind, embrace it…it will keep you alive and aware of your situation." (Small Craft Advisor)

That’s great guidance for anyone wanting to mess about in boats powered by sail, oar, paddle or yuloh. It speaks of a highly refined sense of self awareness and an equally refined awareness of the shifting environment that surrounds us. It’s an approach to life applicable to any endeavor, whether it be exploring the Chesapeake Bay by small boat, writing a book, raising a family or even just sitting in the gazebo watching the cardinals. Too bad more of our political leaders aren’t small boat sailors or bird watchers.