“Finding Beauty in the Darkness” – TTG 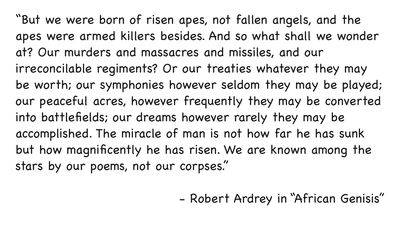 "Scientists announced Thursday that they have succeeded in detecting gravitational waves from the violent merging of two black holes in deep space. The detection was hailed as a triumph for a controversial, exquisitely crafted, billion-dollar physics experiment and as confirmation of a key prediction of Albert Einstein's General Theory of Relativity."

"It will also inaugurate a new era of astronomy in which gravitational waves are tools for studying the most mysterious and exotic objects in the universe, scientists declared at a euphoric news briefing at the National Press Club in Washington."  (WaPo)

This is a big deal. Judging by the giddiness and wide eyed enthusiasm of the scientists making the announcement today, this is a mind altering, stupendously big deal. They have proven the existence of ripples in the fabric of spacetime. Perhaps some of you understand this in its fullest meaning. Or perhaps some of you, like me, are more akin to a pig looking at a wristwatch… abundant curiosity, but precious little understanding. That lack of understanding does not diminish the greatness of this achievement. In the days to come, I will endeavor to reduce my ignorance. I want to share in the giddiness of those scientists.

I can still share in the pride of this scientific achievement. It brings to mind the Robert Ardrey quote I pasted above. I read “African Genisis” in high school. It was damned near a religious experience. Quite an accomplishment considering I was surrounded by Jesuits at that time. I’m not alone in sensing the momentousness of this accomplishment for mankind. Lawrence M. Krause wrote an insightful opinion piece in the New York Times today.

"With presidential primaries in full steam, with the country wrapped up in concern about the economy, immigration and terrorism, one might wonder why we should care about the news of a minuscule jiggle produced by an event in a far corner of the universe."

"The answer is simple. While the political displays we have been treated to over the past weeks may reflect some of the worst about what it means to be human, this jiggle, discovered in an exotic physics experiment, reflects the best. Scientists overcame almost insurmountable odds to open a vast new window on the cosmos. And if history is any guide, every time we have built new eyes to observe the universe, our understanding of ourselves and our place in it has been forever altered."  (continue reading at NYT)

60 Responses to “Finding Beauty in the Darkness” – TTG