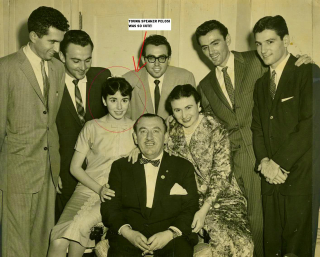 "Pelosi comes from a strong family tradition of public service. Her late father, Thomas D’Alesandro Jr., served as Mayor of Baltimore for 12 years, after representing the city for five terms in Congress. Her brother, Thomas D’Alesandro III, also served as Mayor of Baltimore. She graduated from Trinity College in Washington, D.C. She and her husband, Paul Pelosi, a native of San Francisco, have five grown children and nine grandchildren."  pbs

Being married to a genealogist, I find it obligatory to observe Professor Henry Louis Gates'  weekly TeeVee extravaganza on the subject of the ancestry of various famous, or semi-famous folk.  The show is a classier version of the oldie "This is your life" which ran for many years during my "ute."  ("My Cousin Vinnie" reference).  During the proceedings in that show, one's cousins, 3rd grade teachers and former bosses were brought out from behind the curtain after attempts to guess the identity by remembering their voice.  It was truly fun for the feeble minded.  Gates' show mainly involves construction of a "book of life" on the basis of records research and DNA wizardry.

Last night's principal guest was Nancy d'Alesandro Pelosi.  Wow!  I have never met her and have never paid much attention to her as a personality, but all you had to do was watch her "mug" for the camera and "sculpt" her answers to create her desired narrative to understand that this woman is carrying a lot of psychological baggage and has done so for a very long time.

Her  paternal grandparents were immigrants from a mountain village in Abbruzzo.  Her father, Thomas d'Alesandro, was born in Baltimore (photo above).  He comes across in the Nancy construct as a political version of the De Niro character in "Raging Bull," no beatings but lots of bullying and domination by "the Don."

This guy was determined to keep his family "in line," especially Nancy and her mother, another Nancy.  Any effort on the part of the mother to establish a separate identity was squelched by the father.  The mother created a cosmetics business that had nation wide custom.  The father made his wife close it.  The mother bought investment real estate.  The father made her sell it.  These women, the two Nancys, were his, his possessions, and they were not allowed to have anything like a life of their own.

Speaker Nancy "excuses" his behavior by saying that Italian American men were like that in that era.  At the same time she extravagantly praises her mother.  Gates takes note of the expression of a greater depth of feeling for the mother.  The excessive praise is a hint of the kind of daughter-mother rivalry for the affection of the "Raging Bull" that characterizes the neo-freudian Electra Complex.

I am not a psychiatrist but I made a living for many years by perceiving and manipulating the weaknesses and vulnerabilities of others, both men and women.  Pelosi exhibits the characteristics of someone wounded by her father's personality.

Speaker Nancy escaped the pain of her parental relationships by  marrying a nice Italian-American fellow from San Francisco and migrating to the west coast where after having given life to five daughters she turned to politics.  Her husband is still living but invisible.

Trump seems to be for her an avatar of her father.  He is a domineering man who recalls for her the frustrations of her childhood and adolescence.  The childish, mocking acts of revolt, the tearing up of a copy of his state of the Union Address for all the world to see, the tunnel-vision focus on revenge before all else, these are all symptoms of an irrational obsession.

This is IMO profoundly unfair.  Trump is  a boor.  He is a boastful braggart about women.  He is crude in the mainstream tradition of New York City bullies, but there is no evidence that he ever did anything to hold the women in his family back from personal or business success.  Actually, the women who worked in his corporate headquarters praise him highly.

But, you cannot tell that to anyone suffering the kind of psychological scars that Speaker Nancy bears.  pl

18 Responses to “Finding Your Roots” – The Nancy Pelosi reveal