Graham and McCain’s peace “train” should roll on. 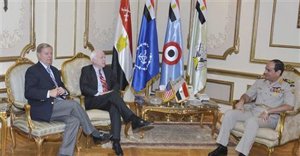 It has been a long time since "the music died."  These days it is difficult to hear even a distant echo.

Having tried so nobly to tell Egypt how to behave it would seem only right that the McCain/Graham peace train should roll on to yet more and even browner pastures.  A bus trip across Sinai and through the territory of their friends would  bring them to Damascus where they could once again work their magic.

And then the road or track will lead east to the Iraq that they did so much to transform.

The Iranians will undoubtedly greet them at the border as peacemakers and they can work out whatever difficulties there may be with President Rouhani and be back home to enjoy the rest of the Summer recess.

This entry was posted in Egypt, Humor, Iran, Syria, Turkey. Bookmark the permalink.

17 Responses to Graham and McCain’s peace “train” should roll on.