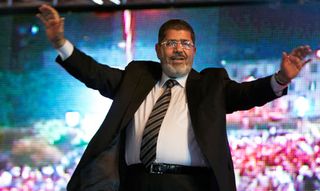 Mark Twain was right.  History does not repeat itself but it often rhymes.  Mursi and Mubarak may be in adjoining cells soon.  Mursi is accused of conspiracy to murder and espionage in the matter of the Hamas raid on the prison in which he was held in 2011.  Egypt has a broad definition of "espionage."  As I have written on SST before, it is widely understood in the Islamic World (as in other places) that "if you strike a king you must kill him."  This is true because if you do not at least figuratively "kill" him he may return and then he will surely kill you.  On that basis it can be said that Mursi and Mubarak are "used people."  This is equally true of that part of the Syrian "opposition" who are not merely foreign jihadi operatives.  Either they will "live" or Assad, but not both.  Both parties know this,

The forces of political Islam are now pitted against pretty much the rest of Egypt in the same sort of existential struggle.  They all know that.  Saudi Arabia is backing the military backed government because it detests the MB version of Islamism.  The United States, having aligned itself with the MB, has zero leverage with General Sisi because the US backs people who would kill him if they could.  There are other sources of military supply in the world.  You can be sure that Israel is happy to see the departure of Mursi.  That will have an effect in the US Congress.  pl

15 Responses to History rhymes in Egypt