“How the US is enabling Syriastan” by Pepe Escobar 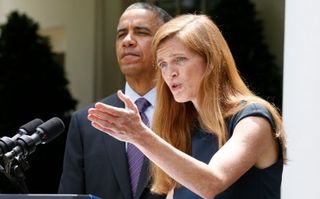 "If any extra evidence was needed to shatter the myth of a "revolution" struggling for a future "democratic" Syria, the big news of the week cleared any remaining doubts.
Eleven, 13 or 14 "rebel" brigades (depending on the source) have ditched the "moderate", US-propped Syrian National Council (SNC) and the not-exactly Free Syrian Army (FSA). The leaders of the bunch are the demented jihadis of Jabhat al-Nusra – but it includes other nasties such as the Tawhid brigades and the Tajammu Fastaqim Kama Ummirat in Aleppo, some of them until recently part of the collapsing FSA."  Pepe Escobar

The good old Tawhid brigades made a "coming out" statement this week in which a spokesman said that they were tired of not stating their allegiance to the creation of a sharia law state, and that the FSA was a godless instrument of Western infiltration,  Well, from their point of view…

R2P and neocon propaganda has manufactured a major "truth" with regard to the origins of the present civil war in Syria.
According to this "truth" the revolt began as a process of peaceful street demonstrations for human rights by folks who wanted whatever it was that Tom Paine wanted.  This now received "truth" insists that it was only when
the evil Assad demon unleashed his cossacks on the crowds that things got nasty.  Well, there were a few such demonstrations but a review of the news from Syria at that time shows that Sunni zealots led by their Imams very quickly made this process into an armed revolt using mosques in places like Deraa and Homs as bases.  The resulting civil war has featured Sunni zealots on one side backed principally by Saudi Arabia and all other Syrians on the other side backed by Russia and Iran.

There are several other IO created truths floating around.  One is the illogical assumption that the 100,000 dead that are mentioned frequently were all killed by the Syrian government.  Say what?

Another is the notion that Hizbullah's forces are under the direct operational control of Iran and can be ordered into battle by Iran or withdrawn as the Iranians see fit.  I doubt that.  pl