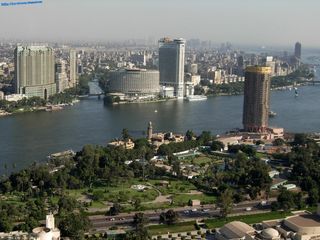 "Egyptian security forces on Wednesday imposed a travel ban on President Mohamed Morsi and several top Islamist allies over their involvement in a prison escape in 2011, security officials said.
Airport officials confirmed to AFP that they had received orders to prevent the leaders — including Morsi, Muslim Brotherhood chief Mohammed Badie and his deputy Khairat al-Shater — from travelling abroad." Ahram

There is no doubt that SCAF is resuming control of Egypt today.  Mursi and company are virtually under house arrest and will be deposed.  He will be joining Mubarak in jail I think.  Big screens have been put up in all major "maydans" (squares).  An announcement is imminent

The US government has already "rolled over" and announced that it does not back "a side," and that its side is that of the Egyptian people.  This means the military will pay no aid reduction price.  In essence the US has now "greenlighted" the coup.  Good.  At last a little realism

This is, of course, another massive defeat for Obama since the Egypt MB/Islamist project has been one of his favorite idiocies.  It is in much the same current of policy that fuels his foreign policy in Syria, Afghanistan and other places.

I juast listened to an ex-State Department "expert" on Egypt plead for a continuin role for the MB.  Hah!    pl