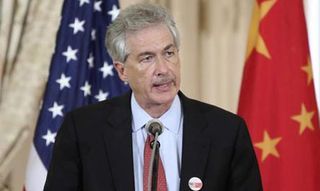 "Under Secretary of State Bill Burns arrived to Cairo early on Monday as part of a two-day visit to urge for a stop to current violence in the country and also to encourage the formation of a democratic, civilian government following a popularly-backed military overthrow of the state's Islamist president.
Ultraconservative Nour Party has refused to meet the senior diplomat in protest at what it perceives as the US interference in Egypt's domestic affairs, state news agency MENA said."  Ahram

Bill Burns is an amiable, capable man.  His father was an Army general who became head of the US disarmament agency.  Bill was ambassador to Jordan once upon a time and is a long service ME type at State.  He is one of the last survivng non- Zionist ME people in the State Department.  It seems that nobody in Cairo wants see him at this point.

Well, from their point of view, why should they?  As I thought we would, the US has backed away from a confrontation over military aid.  The Gulfies have "ponied up" 12 billion dollars in general aid.  Russia and China stand waiting in the wings for any opportunity to enter the contest for influence in Egypt.  Israel is urging the BHO Administration to "ease up" on the Egyptian military.