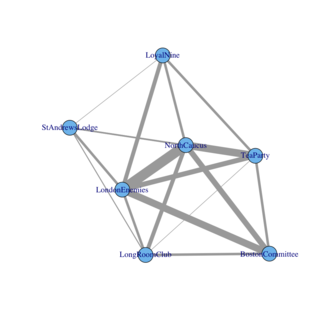 "I have been asked by my superiors to give a brief demonstration of the surprising effectiveness of even the simplest techniques of the new-fangled Social Networke Analysis in the pursuit of those who would seek to undermine the liberty enjoyed by His Majesty’s subjects. This is in connection with the discussion of the role of “metadata” in certain recent events and the assurances of various respectable parties that the government was merely “sifting through this so-called metadata” and that the “information acquired does not include the content of any communications”. I will show how we can use this “metadata” to find key persons involved in terrorist groups operating within the Colonies at the present time. I shall also endeavour to show how these methods work in what might be called a relational manner."  Kieran Healy