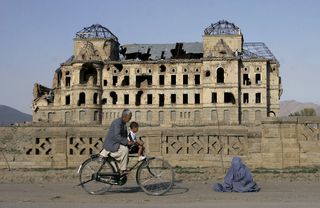 "The amendment, if enacted, would force Obama to seek a vote in Congress to approve continued troop presence in Afghanistan by June of next year. Merkley is looking to attach the amendment to the National Defense Authorization Act, which is currently under consideration by the Senate. An aide to the Oregon senator suggested the Democratic leadership wouldn't decide whether to allow a vote on the amendment, which would serve as a mild rebuke to the White House, until after next week's Thanksgiving recess."  NBC News

It is not clear if there really is agreement between the US and Karzai's government regarding a long term military assistance relationship. So much logrolling is underway that a true picture is hard to discern.

Assuming for the sake of discussion that both the loya jirga and Afghan parliament approve the agreement, it is imperative that the Congress should demand a vote with regard to US acceptance of ths open ended commitment to Afghan security and a virtually blank check for "development projects" in Afghanistan.  pl

This entry was posted in Afghanistan, government. Bookmark the permalink.