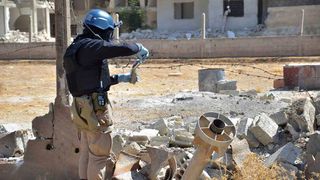 "A report by the Office of the Director for National Intelligence outlining that evidence against Syria is thick with caveats. It builds a case that Assad's forces are most likely responsible while outlining gaps in the U.S. intelligence picture. Relevant congressional committees were to be briefed on that evidence by teleconference call on Thursday, U.S. officials and congressional aides said.
The complicated intelligence picture raises questions about the White House's full-steam-ahead approach to the Aug. 21 attack on a rebel-held Damascus suburb, with worries that the attack could be tied to al-Qaida-backed rebels later. Administration officials said Wednesday that neither the U.N. Security Council, which is deciding whether to weigh in, or allies' concerns would affect their plans.
Intelligence officials say they could not pinpoint the exact locations of Assad's supplies of chemical weapons, and Assad could have moved them in recent days as U.S. rhetoric builds. That lack of certainty means a possible series of U.S. cruise missile strikes aimed at crippling Assad's military infrastructure could hit newly hidden supplies of chemical weapons, accidentally triggering a deadly chemical attack.
"  AP

When George Tenet said the evidence on Iraq was a "slam dunk," he meant it would be easy to "sell" to the American people.  He was correct, but this time, not so much

I applaud the British Labour Party and the "mother of parliaments."  God bless.  pl

63 Responses to “AP sources: Intelligence on weapons no ‘slam dunk'”