Candi C Debaca – a Communist on the Denver city council 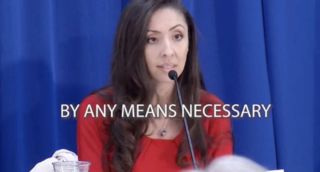 “I think that we’re in late phase capitalism and we know it doesn’t work and we have to move into something new, and I believe in community ownership of land, labor, resources and distribution of those resources,” she continued. “And whatever that morphs into is I think what will serve community the best and I’m excited to usher it in by any means necessary.”  dailycaller quoting CDebaca

We have long had an official Communist Party in the US.  This party has regularly put forward candidates for office.  I don't know of any having won office.  We should remember that John Brennan voted Communist in a presidential election before he joined the CIA. The CPUSA has always been made up of two sections 1 – The visible part and 2 – the occulted (hidden) section that was altogether the tool first of the Comintern and then later of the intelligence services of the USSR, NKVD, etc.  Members of this latter section lived under cover as non-Communists.

IMO a Communist cannot legally take the oath of office that everyone above the status of dogcatcher takes in the US on assuming office.  Such oaths always contain a phrase in which the oath taker legally swears to "defend the Constitution of the US against all enemies, foreign and domestic."  The governmental structures built by the US Constitution inherently limit the power of a "vanguard party" as it would inevitably try to move toward a "dictatorship of the proletariat."   CDebaca's red new deal would clearly require a dictatorship of the proletariat.  The Bill of Rights  (first ten amendments of the US Constitution) would stand squarely in the path of the realization of Candi's reverie.