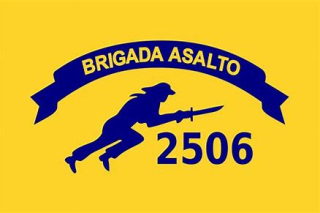 In the Spring of 1961 a lightly armed group of Cuban exiles invaded the south coast of Cuba.  They had little air support and were dwarfed in number by the armed forces of revolutionary Cuba which when brought to bear at the site of the invasion quickly crushed them.  The members of the invading force were captured and imprisoned.  They were held for a time and then released to the US after prolonged negotiations.  Some of them were offered admission to the US armed forces and a number accepted.

The Eisenhower Administration had approved this project.  It was meant to overthrow the new  Communist government of Cuba. In 1960 when it became apparent that the Fidelistas were intent on allying themselves with the USSR Eisenhower decided to try to remove that government.  Before the intentions and true loyalties of the revolutionaries became clear the US government as well as most Americans had been romantically sympathetic to the notion of a tiny band of long exiled rebels having incited a country wide rebellion that overthrew the dastardly caudillo Fulgencio Batista from a base in the jungled mountains of eastern Cuba.  How grand, Robin Hoods with beards come to free the people!  Unfortunately for that view, the emerging Cuba/USSR alliance quickly showed that it would bear fruit in something really dangerous like the emplacement of Soviet IRBMs in Cuba in 1962.

In response to a perceived emerging threat Eisenhower authorized the Bay of Pigs invasion project in a presidential finding that was altogether legal under US law.  The laws in question were the 1947/1958 National Security Acts which allowed the president to order the CIA (not the armed forces) to carry out covert military actions of the Bay of Pigs variety.  The operation was planned by CIA in the expectation that the Cuban people, if given the inspiration of a Cuban manned invasion force, would rise and throw out the Communists.  The plan included stand-by US air support in case things got "sticky" after the landing.  On that basis the Joint Chiefs of Staff gave the CIA plan their blessing.

The new Kennedy Administration detested the Castro government and decided to continue invasion preparations with one critical emendation.  The open use of US air power to support the invasion was taken out of the plan.  The Camelot crew at the Kennedy White House did not realize how dangerous it was to remove that pillar of the plan.  No one bothered to inform the JCS that the plan had been changed.

In the event, the Cuban people did not rise to support the invasion, The Cuban armed forces crushed the effort and a key part of that success was the uncontested application of Cuban air attacks on the beachhead.

The whole thing had been a shoestring operation concocted by the militarily inept paramilitary section of the CIA run by former but failed junior military officers assisted by a few  sergeants borrowed from the active armed forces for this project.

I knew one such.  When I was in the 8th SFGA in the Panama Canal Zone I was for a time in the staff intelligence section of group headquarters.  The senior sergeant in the section was a master sergeant of Nicaraguan birth who had been borrowed by CIA to be the chief trainer of the paratroop component of the invasion force.  He trained these Cubans in Guatemala while posing as a retired US Army senior airborne officer and then sent them on their way to the Bay of Pigs while standing alongside the runway waving at each plane as it took off.

Does this sound fantastical and unlikely?  It does to me as well, but it was all true.  One day I was in the Ft. Gulick PX with Sergeant Gonzalo ——- when we were approached by a US Army captain who looked Gonzalo up and down and said "Colonel Jim!  You are a sergeant?"  He was amazed.  He was one of the Bay of Pigs prisoners who had been taken into the US Army after release from prison.  "Colonel Jim" had trained him and his comrades for war in Cuba.

The  analogy to whatever it is that the US has been covertly trying to do in Venezuela is obvious with some differences:

1.  There is no exile military force trained by the CIA for insertion as a rallying point for the the anti-Communist forces among the people and armed forces of Venezuela.

2.  There is no evidence that First in his Class and the Stache have persuaded the Commander in Chief to commit US military support in any way to the Venezuela project of regime change.  In the Bay of Pigs case the US military stood ready in the background to intervene if ordered to do so but were never so ordered.  That does not seem to be the case now.

3.  There is some evidence that most Latin American states would like to see regime change in Venezuela.  That was not true in 1961.

4.  There is no USSR.  The attempt to portray the Communist government of Venezuela as a Russian or Chinese bridgehead in the Western Hemisphere is just absurd.

My SWAG is that Maduro's troops and police will crush today's "revolt," arrest Guaido and his handful of military supporters and put them on trial. The US will do nothing but wring its hands in frustration.

Remember – Analysis is not Advocacy.  I would love to see the Maduro government fall.  pl

This entry was posted in History, Policy. Bookmark the permalink.