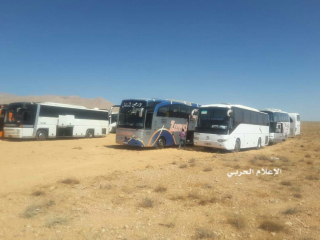 "Few moments ago, the US-led coalition air power bombed  an ISIS convoy moving from the Qalamoun area to the Syrian province of Deir Ezzor under the deal with Lebanese security forces, according to local sources.

No confirmed reports about the possible casualties are available.

About 300 ISIS members and 300-500 civilians withdrew from the Qalamoun area at the Syrian-Lebanese area after the deal had been reached with the support of Hezbollah.

Well pilgrims, this ought to have some effect on the America haters who insist that the US created and runs IS for treacherous and nefarious secret purposes having to do with guano deposits in Kurdistan or some such thing.  But, it won't affect their nonsense at all.  A suitable rationalization will be found for the continuation of their lunacy.

Unfortunately, there will have been a lot of killed and wounded in this attack and some of them were probably Syrian bus drivers.  pl