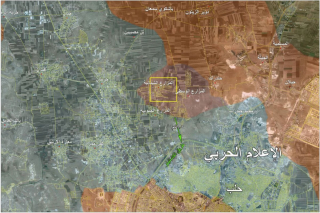 "Frankly, I doubt that Suheil has enough men and tanks in hand to accomplish the closure of the Aleppo pocket from the north."  Quoting myself in my post "The Greatest Battle."

"After the liberation of the Mallah Farms, the Syrian Army troops are now deployed in only 1,5 km from the militants’ last supply line to Aleppo City – the Castello road.

This poses a significant threat to Al Nusra and its allies in Aleppo. If pro-government forces are able to cut off the Castello road, the militants will be besieged in the northeastern part of the city without any supplies."  South Front

If the map is accurate the R+6 has now come close to the presumptive objective of Suheil's operation.  IMO this is the isolation of the rebel zone in Aleppo City and we will learn a couple of things:

This entry was posted in Current Affairs, Middle East, Syria. Bookmark the permalink.