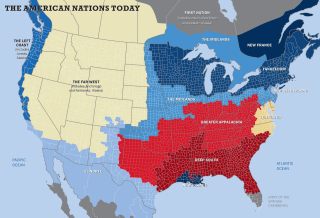 "Nation" is a much abused and misunderstood word in today's America.  Many Americans think the word means country as in "nation-state," a term that denotes a state the boundaries of which include within it just about all the members of a particular culture.  The construction of "nation-states" has often been an obsession .  France is an example.  The present country includes regions that were once culturally dissimilar.  Brittany, Guyenne, Normandy, Savoy were all regions that Louis XIV  and company obsessed over in the hope of absorbing them politically and culturally.  If you doubt that, drive around France and visit weekly village markets for the purpose of listening to them speak.  The record of their ancestral differences is evident from their speech.  "Nation" is  a term implying IDENTITY.  It is not a matter of lines drawn on maps.

There was an earlier book entitled "The Nine Nations of North America" by one Joel Garreau.  That book had much the same thematic material as this.  I was much impressed with the earlier book and plan to read this one if my cataract surgery is successful.

There is always a lot of loose talk about "The American People."  IMO that kind of talk is unproductive and largely the result of generations of nationalist (Yankeeland in source?) propagandist conditioning of children in the public and private schools, schools that function largely as training centers for this nationalism and the creation of an electorate that has  utopian expectations of government benevolence.

In spite of this program of indoctrination, cultural differences among citizens of the US persist on the basis of regional culture of various origin, and indeed, as Woodard writes, these differences are growing stronger as the population of the country re-distributes itself.

An example is the movement of large numbers of people from outside the "Tidewater" area into eastern Virginia, sufficient to have made the state Blue (Democrat) when it had long been "Red." (Republican).  pl