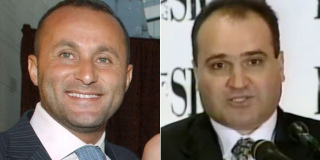 "A businessman who helped broker a meeting between an ally of President Donald Trump and an official of the Russian government has been indicted for allegedly funneling millions in illegal campaign contributions to support Hillary Clinton’s 2016 presidential campaign.

George Nader, who was charged in another case earlier this year with child trafficking and transporting child pornography, was one of seven people named in an indictment unsealed in Washington, D.C. on Tuesday night involving the campaign payments.

Nader, 60, is charged with funneling money to Ahmad “Andy” Khawaja, 48, of Los Angeles in order to circumvent federal election laws that restrict the amount of donations from a specific individual and where that money is actually coming from, prosecutors say."

This is yet another explanation of a source of the vast and fabled campaign money that HC spent so lavishly in 2016.  pl

This entry was posted in Justice, Politics. Bookmark the permalink.

11 Responses to The Lebanese Connection