The tanker damage in the Gulf was probably a “provocation” aimed at Iran. 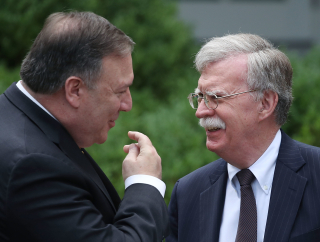 "The revisions were ordered by hard-liners led by John R. Bolton, Mr. Trump’s national security adviser. They do not call for a land invasion of Iran, which would require vastly more troops, officials said.

The development reflects the influence of Mr. Bolton, one of the administration’s most virulent Iran hawks, whose push for confrontation with Tehran was ignored more than a decade ago by President George W. Bush.

It is highly uncertain whether Mr. Trump, who has sought to disentangle the United States from Afghanistan and Syria, ultimately would send so many American forces back to the Middle East."  NY Times

"It is also unclear whether the president has been briefed on the number of troops or other details in the plans. On Monday, asked about if he was seeking regime change in Iran, Mr. Trump said: “We’ll see what happens with Iran. If they do anything, it would be a very bad mistake.”

There are sharp divisions in the administration over how to respond to Iran at a time when tensions are rising about Iran’s nuclear policy and its intentions in the Middle East."  NY Times

IMO the armed forces (persons unknown therein) leaked the base information in this article to the NY Times to warn Trump of the wild eyed foolishness of the crew he has allowed to run US foreign policy.

In the information briefing (as opposed to a decision briefing) described in this article concerning military options, Trump was not even present.

What has happened once again is that Bolton asked DoD for options for the president/CinC's contemplation.  As I have written in the last days, neither Bolton nor Pompeo has any command authority over the armed forces.  Neither does Haspel at CIA.  Only the president can command them.  Only he has the constitutional authority to do so.

IMO the neocon squeeze with regard to Iran is in high gear.  The aim is probably to pressure Iran until they lash out somewhere against US forces or interests.

Trump would then be urged by the madmen in the White House to order the armed forces to attack.  pl

This entry was posted in As The Borg Turns, Borg Wars, Current Affairs, Iran, Middle East. Bookmark the permalink.

36 Responses to The tanker damage in the Gulf was probably a “provocation” aimed at Iran.