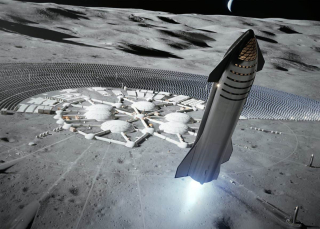 "Today SpaceX is one step closer to Mars! The aerospace company performed an incredible test flight with a prototype of the Starship spacecraft that could one day transform humans into a multiplanet species. This afternoon SpaceX conducted the first high-altitude test flight and achieved many milestones during the launch! The Starship SN8 prototype soared approximately 50,000 feet (15-kilometers) into the sky powered by a trio of Raptor engines."

"During the epic flight test SpaceX tested the vehicles aerodynamic flaps during a ‘belly dive’ maneuver that left everyone in awe. The maneuver is important towards Starship’s development, it is how the spacecraft will move to enter a planet’s rough atmosphere before landing. The test flight lasted around seven minutes in which Starship used its aerodynamic flaps to glide itself down Boca Chica’s sky. SN8 was capable of reorienting itself to a vertical position to prepare for a landing, but upon landing the vehicle exploded."

"However, Starship SN8 performed an excellent flight. SpaceX said SN8 is "designed to test a number of objectives, from how the vehicle’s three Raptor engines perform to the overall aerodynamic entry capabilities of the vehicle (including its body flaps) to how the vehicle manages propellant transition […]," the company wrote on its website, “With a test such as this, success is not measured by completion of specific objectives but rather how much we can learn, which will inform and improve the probability of success in the future as SpaceX rapidly advances development of Starship.” Musk shared the vehicle achieved going through all the testing objectives -“Successful ascent, switchover to header tanks & precise flap control to landing point!” he wrote via Twitter. He also shared that the reason why Starship SN8 exploded upon landing was because the –“Fuel header tank pressure was low during landing burn, causing touchdown velocity to be high & RUD [Rapid Unscheduled Disassembly], but we got all the data we needed! Congrats SpaceX team hell yeah!!” Musk stated via Twitter after the successful test flight today. “SN8 did great! Even reaching apogee would’ve been great, so controlling all way to putting the crater in the right spot was epic!!” he said."  tasmanian

I waited all day to watch this bird fly.  It was absolutely grand.  The nose dive and glide followed by self righting was all that one could hope for in an early test.  This machine is the gateway to the solar system.  pl