Borovski and the Haredim 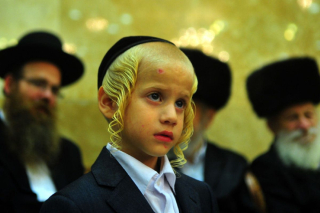 "Borovski said she left behind the ultra-Orthodox, known in Israel as the Haredim, never having opened a bank account, ridden a bus, applied for a job or talked to a stranger.

She has done all of those things now, in what she describes as a sprint to make up for the decades she spent in a cultural cocoon, never wandering more than 500 yards from the house where she said she and her 12 brothers and sisters learned nothing of science or math, or of history outside of religious texts. Borov­ski — who belonged to the Satmar Hasidic group, known for its especially strict religious adherence — said she wasn’t just denied television, radio and the Internet but was unaware of their existence.

“I’m trying to catch everything now,” she said during a break from a lesson on cell structure, part of a remedial studies program offered by Hebrew University of Jerusalem to students who missed out on basic schooling. “I don’t think I have enough time.”"  Washpost

Yes, I know, pilgrims, the Haredim have a right to live however they please, just as Mormon schismatics, cloistered monks and the Amish/Mennonites do, but it is nevertheless interesting that this woman and those like her emerge into the "light" of the 21st Century as though they had just come from the womb.

As many of you know I was the chief intelligence liaison from DIA to the IDF General Staff intelligence service for seven years.  Because of that I spent a lot of time in Israel wandering around when not working and talking to IDF people about the Haredim among other things.  I don't think I ever ran into an IDF officer who had other than disdain for the Haredim.  A lot of the IDF were kibbutzniks, products of structured life on a collective farm in a socialist secular setting.  They thought the Haredim were ignorant freeloaders who used their cultist beliefs to hide out from the draft while collecting comfortable stipends from the government as "religious scholars."   In some Haredi groups the women shave their whole bodies and when out in public accompanied by a male relative wear funny looking curly synthetic hair wigs.  This was interesting.

Chacun a son gout the old maid said as she kissed the cow.  pl

This entry was posted in Israel, Religion. Bookmark the permalink.

12 Responses to Borovski and the Haredim