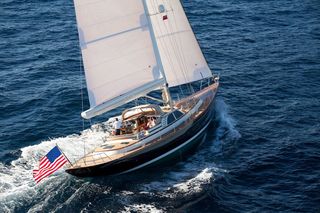 "… Psaki issued a statement correcting the record on Kerry’s whereabouts off Nantucket.
“While he was briefly on his boat on Wednesday, Secretary Kerry worked around the clock all day including participating in the president’s meeting with his national security council,” she said.
A Kerry aide who was not authorized to speak publicly said the denial on Wednesday was the result of “confusion,” saying Kerry had apparently taken his grandson out for an hour-long sail.
Kerry’s aides bristled at the suggestion that he is simply lounging around, saying he has been working the phones while on vacation with world leaders and participating in White House meetings about the situation in Egypt and a series of other pressing foreign policy challenges.
"  Boston Globe

Rome, er Egypt burned while Kerry fiddled, er sailed off Nantucket.  Rich boy stuff,the action of the plaything of a Ketchup widow.  I hope she enjoyed the sail.

Kerry, the "war hero," a man who long ago had to speak the truth to the senate even though he did not know the truth and only mouthed words that said nothing of anything he had witnessed. But the words were convenient to him.

A playboy nitwit with intellectual pretensions, everything he has touched as secretary of state has turned to ashes except what's her name.  Ah, "Isabel."

28 Responses to The “Isabel” affair