“A Salafi shindig” The Economist 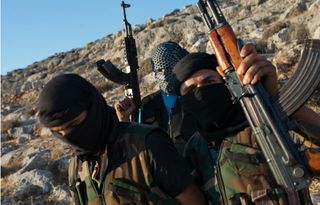 "The rate at which foreign fighters, both seasoned jihadis and inexperienced young men, have headed for Syria eclipses that of recent conflicts in Afghanistan, Somalia and Yemen; and rivals the pull of the battle against the Soviets in Afghanistan in the 1980s and that against American-led forces in Iraq in the last decade. Exact numbers are not available, but they have been growing steadily since the start of the conflict, and some say there has been a big jump since the latter half of last year. Turkish flights from Istanbul to Antakya, the entry point to Syria, are something of a jihadi express—though men now travel with women to avoid arousing suspicion from the authorities. Salafi networks from Chechnya to Jordan, Brussels to Tunis arrange the logistics for fighters to transit into the country. Most, but not all, fight with Jabhat al-Nusra, an extremist group with links to al-Qaeda. There are brigades led by Chechens and Libyans."  The Economist

The jihadis in Syria have now declared that the FSA are as much the enemy as the Syrian government.  They have backed that up by killing one of the senior leaders of the FSA and declaring in telephone calls that they intend to kill all the lleaders of the FSA in order to insure the creation of an Islamic emirate in Syria.  The Afghan Taliban have set up a base in Syria.  Jihadis are pouring int othe country.

At the same time Russia has now formally accused the US, Britain and France of obstructing the work of a UN mission sent to Syria to discover the truth about the use of Sarin gas.  Syria has invited the UN in and the UN has accepted the offer.

Does Obama really want to go down the road of arming our jihadi enemies?  Does Congress wish to allow him to do so?  pl

13 Responses to “A Salafi shindig” The Economist