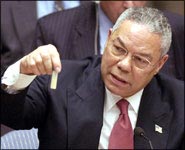 "Western experts on chemical warfare who have examined at least part of the footage are skeptical that weapons-grade chemical substances were used, although they all emphasize that serious conclusions cannot be reached without thorough on-site examination.
Dan Kaszeta, a former officer of the U.S. Army's Chemical Corps and a leading private consultant, pointed out a number of details absent from the footage so far: "None of the people treating the casualties or photographing them are wearing any sort of chemical-warfare protective gear," he says, "and despite that, none of them seem to be harmed." This would seem to rule out most types of military-grade chemical weapons, including the vast majority of nerve gases, since these substances would not evaporate immediately, especially if they were used in sufficient quantities to kill hundreds of people, but rather leave a level of contamination on clothes and bodies which would harm anyone coming in unprotected contact with them in the hours after an attack. In addition, he says that "there are none of the other signs you would expect to see in the aftermath of a chemical attack, such as intermediate levels of casualties, severe visual problems, vomiting and loss of bowel control."
Steve Johnson, a leading researcher on the effects of hazardous material exposure at England's Cranfield University who has worked with Britain's Ministry of Defense on chemical warfare issues, agrees that "from the details we have seen so far, a large number of casualties over a wide area would mean quite a pervasive dispersal. With that level of chemical agent, you would expect to see a lot of contamination on the casualties coming in ,and it would affect those treating them who are not properly protected. We are not seeing that here."
Additional questions also remain unanswered, especially regarding the timing of the attack, being that it occurred on the exact same day that a team of UN inspectors was in Damascus to investigate earlier claims of chemical weapons use. It is also unclear what tactical goal the Syrian army would have been trying to achieve, when over the last few weeks it has managed to push back the rebels who were encroaching on central areas of the capital. But if this was not a chemical weapons attack, what then caused the deaths of so many people without any external signs of trauma?
"  Ha'aretz

This article in an Israeli newspaper makes it clear that it is not at all clear
who carried out these attacks or if there actually were chemical attacks.  pl

29 Responses to Chemical experts doubt the truth of mass gas attacks in Syria.