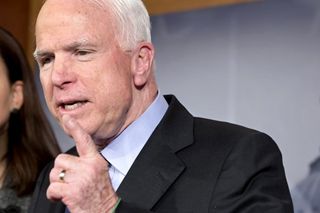 "On Tuesday, two Republican senators, Lindsey Graham and John McCain, frequent critics of President Obama, said he had asked them to visit Egypt next week to help persuade the interim leaders to move forward with new elections and an inclusive government. The senators said they would convey a bipartisan message from the United States, which has regarded Egypt as a crucial Arab ally in the Middle East for decades and provides $1.5 billion in annual aid.
The decree aimed at ending the sit-ins came shortly after the interim authorities announced they had referred the top spiritual leader of the Muslim Brotherhood, Mohamed Badie, and two other senior Islamist figures to a criminal court on charges of incitement to murder. The step was seen as a further expansion of the crackdown on the Brotherhood. "  NY Times

Instinct tells me that a major action is impending against the pro-Mursi street crowds.  It would seem that the new Egyptian government is unimpressed with noise from abroad.

Can it be that McCain and Graham will
actually be there when this "goes down?"  How splendid that would be!  They should take Joe Lieberman with them.

US policyin Egypt since the Bush Administration has been a "perfect storm" of incompetence and naive striving for something that does not exist in Egypt.  That non-existent "commodity" is political maturity.  pl