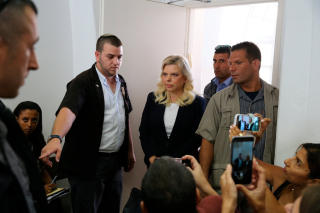 "Sara Netanyahu, the wife of Prime Minister Benjamin Netanyahu of Israel, accepted a plea bargain on Wednesday morning and will pay about $15,000 in fines and restitution to settle accusations that she misused about $100,000 in public funds in managing the couple’s official residence.

Prosecutors said that Ms. Netanyahu, whom they charged with fraud, had concealed that a cook was on the payroll so that she could order hundreds of catered meals from expensive restaurants and charge them to the state.

Under the deal with the State Attorney’s Office the amount of public money at issue was halved to about $50,000, and Ms. Netanyahu agreed to plead guilty to a lesser charge of trickery, specifically that she deliberately exploited another person’s mistake. She is due to pay about $2,800 in fines and $12,500 in restitution.

Ms. Netanyahu, 60, was indicted on charges of fraud and breach of trust a year ago in the case, which covered the years 2010 to 2013. Prosecutors accused her of “exploiting her status as the wife of the prime minister” and colluding with a top aide in a “planned, ongoing and systematic” scheme to break government rules and conceal it from state accountants."  NY Times

Sara, Sara,,,  What a naughty girl you have been.  You had the government chef at the PM's residence order out for you and then the two of you reimbursed the operation from government funds?

And people, cruel, probably Anti-Semitic people, say that you are abusive to residence staff and repair crews.  Ah, but they are Jews .  Alas, more self-haters.

"They have no right to say we should live like bourgeois"  She was speaking of the public in Izghael.  It will be interesting to see if her hubby is re-elected.  pl

This entry was posted in Israel. Bookmark the permalink.