I hope you are sitting down and prepared to go into shock. Breaking news–““In late July 2016, US intelligence agencies obtained insight into Russian intelligence analysis alleging that US Presidential candidate Hillary Clinton had approved a campaign plan to stir up a scandal against US Presidential candidate Donald Trump by tying him to Putin and the Russians’ hacking of the DNC.” If you are not a regular reader of SST, yes, you will be shocked. But for you old timers, you already knew this.

Yes. I am taking another well earned victory lap. I was the first to write about this. You can find my piece here (published on 6 May 2019). Director of National Intelligence John Ratcliffe gave Senator Lindsey Graham a letter today detailing recently declassified intelligence outlining the Clinton Campaign’s effort to manufacture a collusion narrative featuring Donald Trump and Vladimir Putin. Here’s the letter: 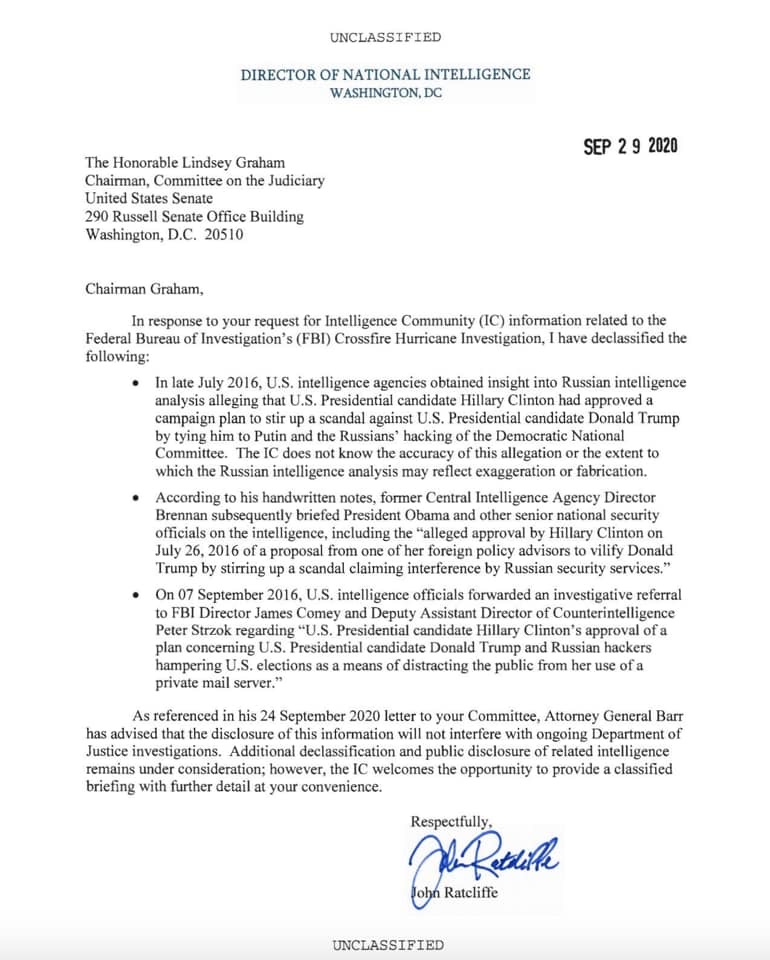 Ratcliffe’s letter, which is based on information obtained by the CIA, states that Hillary decided on 26 July 2016 to launch the Russia/Trump strategem. But the CIA was mistaken. The Clinton effort started in 2015–December 2015 to be precise.

Thanks to Wikileaks, we have a copy of an email exchange between Hillary’s Campaign Manager, John Podesta and longtime Democratic operative Brent Budowsky talking about how Hillary should take on The Donald. Budowski tells Podesta:

“Best approach is to slaughter Donald for his bromance with Putin, but not go too far betting on Putin re Syria.”

This was more then opposition research by Hillary’s campaign. It entailed an extensive weaponization of U.S. and foreign law enforcement and intelligence assets that set out to identify and target members of Trump’s campaign who could be used to feed the Russian collusion meme.  Hillary, for example, had a powerful and dangerous ally in a London firm comprised of former MI6 assets–Hakluyt:

there was a second, even more powerful and mysterious opposition research and intelligence firm lurking about with significant political and financial links to former Secretary of State Hillary Clinton and her 2016 campaign for president against Donald Trump.

Hakluyt is described by the Bureau of Investigative Journalism’s Henry Williams as “one of the more secretive firms within the corporate investigations world” and as “a retirement home for ex-MI6 [British foreign intelligence] officers, but it now also recruits from the worlds of management consultancy and banking … ”

It is no mere coincidence that Australian diplomat, Alexander Downer, who was credited by the FBI as serving up the predicate to launch the investigation into George Papadopolous, also was closely tied to the Clinton Foundation and funneling Austailian money to the Clinton’s. Back in 2006, Downer was Australia’s Foreign Minister  when he and Bill Clinton signed a $25 million Memorandum of Understanding, marking the first round of Australian taxpayer donations to the Clinton Foundation.

The timing of Alexander Downer’s “sudden concern” about Papadopolous is very suspect. Downer waited two months before informing US authorities about Papadopoulus’s alleged drunken bragging about the Trump team working with the Russians to get Hillary. But why wait two months? Should we take it as nothing more than this being a coincidence with the fact that Hillary at the same time approved an effort by her campaign to tie Trump to Russia in order to divert attention from her email scandal. The alleged Russian hacking of DNC emails was front-page news around the world by June 15. Why did it take Downer four more weeks to comprehend the dire implications of Papadopoulus’s intoxicated ramblings? Papadopoulos disputes Downer’s account. Yet, per Mueller, this was one more event justifying the Russian interference meme.

It was Downer who told the FBI of Papodopoulos’ comments, which became one of the “driving factors that led the FBI to open an investigation in July 2016 into Russia’s attempts to disrupt the election and whether any of President Trump’s associates conspired,” The Times reported.

Downer, a long-time Aussie chum of Bill and Hillary Clinton, had been on Hakluyt’s advisory board since 2008. Officially, he had to resign his Hakluyt role in 2014, but his informal connections continued uninterrupted, the News Corp. Australian Network reported in a January 2016 exclusive:

But it can be revealed Mr. Downer has still been attending client conferences and gatherings of the group, including a client cocktail soirée at the Orangery at Kensington Palace a few months ago.

His attendance at that event is understood to have come days after he also attended a two-day country retreat at the invitation of the group, which has been involved in a number of corporate spy scandals in recent times.

The Clinton Plot, aided and abetted by the CIA and the FBI, to destroy Donald Trump continues to chug along. But it is no longer avoiding scrutiny. The truth is coming out, albeit slowly. But this latest revelation should be considered in the context of news that John Durham also is taking a fresh look at the criminal conduct of the Clinton Foundation. I do not think these matters are unrelated.

25 Responses to I Told You Long Ago, Hillary’s Team Helped Fabricate the Trump Russia Collusion Lie by Larry C Johnson