Posted on February 27, 2020 by Andrei Martyanov

Everybody's restless and they've got no place to go

But don't it make you want to rock and roll
All night long
Mohammed's Radio
I heard somebody singing sweet and soulful
On the radio, Mohammed's Radio

You know, the Sheriff's got his problems too
He will surely take them out on you
In walked the village idiot and his face was all aglow
He's been up all night listening to Mohammed's Radio

This late Warren Zevon's song is echoing through my head today. Whether you fancy yourself Mohammed or the village idiot, I suggest you pay attention to the radio (or internet) for the sh*t is about to truly hit the fan in Syria. The jihadis have managed to retake Saraqib and cut the M5 afters days of relentless and costly attacks. To the south, an SAA attack spearheaded by the 25th Division and Liwa al Quds has retaken another large swath of Idlib south of the M4 including the Al Zawiya Mountains and the Al Ghab Plain. The 25th is now returning to Saraqib to spearhead the counterattack on that front. The 4th Armored Division may be joining them. 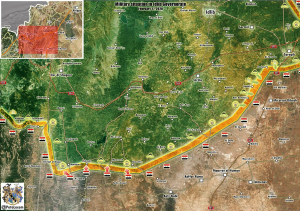 This back and forth on the battlefield is to be expected, especially with the direct support provided by Turkey to the jihadis. However something changed today. Russian and Syrian air attacks have increased with devastating results. Wild reports of a strike on a Turkish convoy and/or positions with up to a hundred dead Turkish soldiers are flashing across social media. Up to this point Turkish casualties have been a few here and a few there every day. This is a direct threat to Erdogan's authority. Twitter has been shut down within Turkey to hide the news. Turkish-Russian talks to redefine the Idlib deescalation zone have ended in failure. Erdogan has told all jihadis to be prepared to go for broke and has declared all Syria to be a target of the Grand Sultan's wrath. Putin has told Erdogan that his presence on any Syrian territory is temporary. All Syria will be ruled from Damascus.

Meanwhile, the old lady from South Carolina is pleading with Trump to establish a no fly zone in Idlib. I'm fairly confident that Trump will not fall for such stupidity, but who knows what will happen if Erdogan whispers sweet nothings in Trump's ear.

The rhetoric is becoming increasingly heated and the actions increasingly dangerous. What happens when Erdogan sends waves of refugees to Europe with the threat of Coronavirus in the wind? What happens if Erdogan confiscates Trump towers in Istanbul? Will Erdogan send his air force into Syria and will Russian and Syrian air defenses shoot down the Turkish planes? Is Putin about to deliver an Ottoman slap to Erdogan? Keep your ears to the radio, my friends.

This entry was posted in Russia, Syria, TTG, Turkey. Bookmark the permalink.