Posted on September 25, 2018 by Andrei Martyanov 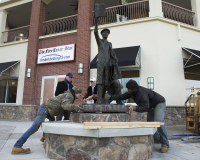 One of the joys of retirement is having the time to leisurely read the local newspaper while enjoying a mug of tea. Alone. In silence. No internet. No TV or radio. When the weather permits, I may perform this ritual on the deck or in the gazebo in the company of the squirrels and birds.

This morning’s edition of the Free Lance-Star reminded me why I find such value in the local paper. Three stories dominate the front page. The first is an examination of the environmental damage caused by the construction of a golf course resort overlooking the Rappahanock River near the town of Tappahanock. The planned development sits atop the historically and environmentally sensitive Fones Cliffs. Opposition to the project is spearheaded by two groups dear to my heart, the Friends of the Rappahannock and the Chesapeake Bay Foundation. They’ve set the Virginia AG and DEQ on those son-of-a-bitchin’ New York developers. What is it about those guys?

The second story is a continuation of the saga of the slave auction block in downtown Fredericksburg. Should it stay or should it go. They'll figure it out some day.

The front page story accompanied by the largest photo chronicles the life of Milton Kline, the man who ran the University of Mary Washington paint crew for the last 25 years. He retired last month after 40 years at UMW and plans to continue working as a part-time painter at UMW. I love this kind of story. Fortunately, the Free Lance-Star publishes a lot of them.

There is a column that I seldom miss written by a local curmudgeon named Donnie Johnston. He often writes about his crops and the goings-on around his farm. He also chronicles the good old days and not so good old days in the region. Today’s column is entitled “Nothing beats naturally dried clothes.” Donnie’s an acquired taste.

The lead article in today’s Town and Country section is about William Freehling Sr. and his new book. Freehling now calls Fredricksburg his home. His book goes beyond local interest and I thought many of my fellow correspondents here may find it to be of interest. I haven’t read the book, but I plan on doing so.

By Emily Jennings  The Free Lance-Star

Radiating from the face of “Abraham Lincoln: The Man,” the magnificent statue that resides in Chicago’s Lincoln Park, is a mixture of anger, submission, sadness—and tenacious persistence.

This face, formed from a life mask of the former U.S. president by Irish sculptor Augustus Saint–Gauden 19 years after Lincoln’s death, fascinated a teenage William W. Freehling Sr., who lived with his family in an apartment that overlooked the park.

“Some tormenting question obsessed him,” Freehling wrote in the introduction of his new book, “Becoming Lincoln,” released Tuesday, Sept. 25, by the University of Virginia Press. “What could make a great victor so sad?”

Freehling, in one way and another, has spent a lifetime pursuing that question, resulting in the decision a few years ago to analyze it more fully with his own biography of our nation’s 16th president.

“Few historians have given enough emphasis to the coming of the Civil War, Lincoln before the presidency—in what ways his life before affected how he filled that role,” Freehling said. “There is no one in history more successful who failed more often.”

Freehling approached the task with unique qualifications, having already completed several noteworthy books on the American South during the antebellum era, including “Prelude to Civil War: The Nullification Controversy in South Carolina,” which won the 1967 Bancroft Prize, and the two-volume “Road to Disunion”—“Secessionists at Bay, 1776–1854,” and “Secessionists Triumphant, 1854–1861.”

Freehling values studying under such distinguished scholars as Arthur Schlessinger Jr. and Kenneth Stampp, but honors his high school history teacher, Sonia Salk Heller, for sparking an interest in his future career.

“She made it all come alive for me,” Freehling said. “She stressed that political history must be based on social history, which made it all much more interesting to me, and has always influenced my writing.”

Freehling conducted much of his research for “Becoming Lincoln” at the University of Virginia as a permanent Senior Fellow with the Virginia Foundation for the Humanities, which brought him to Charlottesville.

Six years ago, Freehling and his wife, Alison, moved to Fredericksburg to live closer to his son and daughter-in-law and their children. William Freehling Jr., is Fredericksburg’s director of economic development and tourism and previously wrote for The Free Lance–Star.

You can read the rest of the article here if you are moved to do so. If you are wondering, the photo at the top of this article is of a bronze statue of a newspaper delivery boy that stands in front of the offices of the Free Lance Star. When I was about that age, I delivered the New Haven Register from the same kind of shoulder bag… but I never wore knickers.