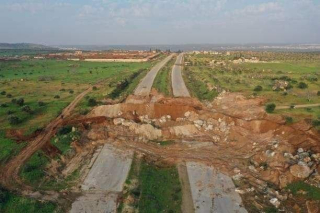 An expression of jihadi displeasure with Erdogan

BEIRUT, LEBANON (3:00 P.M.) – A Turkish military convoy that was traveling through the Idlib countryside on Wednesday was reportedly ambushed by unknown assailants, Muraselon news reported, citing opposition media. The Muraselon report said the Turkish Army convoy was traveling through the town of Mahambal when they were ambushed by the unknown assailants.

“According to information monitored by Muraselon, a Turkish Army convoy was subjected to a number of explosive devices during a crossing along the Latakia-Aleppo road (M-4), which is under the control of the militants; this led to the loss of a number of Turkish forces,” Muraselon said.

The report said clashes broke out shortly after the attack, later resulting in the Turkish Army cordoning off the area. Some opposition activists have accused the jihadists of the Hurras Al-Deen Group, but they have denied any role in the ambush.  (Al Masdar News)

’Tis a puzzlement. Will the Turkish Army continue their shoulder to shoulder support of their jihadi brothers when the SAA and Russian Aerospace Forces inevitably start clearing the M4 or will the Turks abandon the jihadis to their fate?

Erdogan appeared to be content with the latest plan to cede the control of the M4 highway, Jisr al Shighour and Arihah to Damascus. The jihadis were not content with any of this. They stopped the joint Turkish-Russian patrols of the M4 and bulldozed a section of the highway in a fit of displeasure.

These actions and this incident at Muhambal shows that some jihadis are not pleased with Erdogan’s level of enthusiasm for their cause. And they are showing their displeasure at his lack of enthusiasm. It will be truly interesting to see how this aspect develops when the next phase of Operation Idlib Dawn kicks off.

6 Responses to Incident at Muhambal – TTG