Is Whistleblower Aid a Charity Fraud? by Larry C Johnson

There has been a lot of smoke and diversion put up with regards to alleged whistleblower Eric Ciaramella thanks to the work of his lawyer, Mark Zaid, and the charitable foundation supporting this effort–Whistleblower Aid. I think it is time to set the record straight and raise some serious questions about both Ciaramella and the charity backing him.

Eric Ciaramella, according to various press reports, is a CIA intelligence analyst who also has close ties to Democrats working against Donald Trump. Ciaramella worked at the National Security Council on the Ukraine issue and had repeated contacts with individuals, such as DNC operative Alexandra Chalupa, who were involved in the plot to smear Donald Trump as an agent of Russia. It also is reported that Ciaramella was suspected of being the source for a false story claiming that former FBI Director Comey was fired because Vladimir Putin told Trump to do it. And, most importantly, Ciaramella was back at CIA Headquarters when Donald Trump spoke with Ukraine’s President Zelensky. He did not listen in on the call nor did he have access to the transcript.

Here’s the bottomline–Ciaramella, lacking first hand information, does not qualify as a whistleblower. As a former intelligence analyst, like Ciaramella, I know that you must have first hand information. What qualifies as first hand? You listened in on the conversation. You read the transcript. Or, and no one has raised this, you have a piece of human or signals intelligence that tells a different story from the publicized transcript. ZERO evidence for any of this. Ciaramella’s only qualification is that he does not like Trump and his policies towards Ukraine.

Then there is the indisputable fact that the Ukrainian President is on the record, in public, denying any pressure and denying any quid pro quo.

All of these facts justify bringing Mr. Ciaramella before Congress, putting him under oath and getting him to explain the foundation for his claims. But Democrats and anti-Trumpers are saying “no” and insisting that the identity of the whistleblower must be protected at all costs. That is bunk. There is only one legitimate reason to keep the whistleblower’s identity secret–i.e., if he or she was undercover, either official or non-official. Ciaramella was not undercover. He is no different from any other civil servant who works in any other part of the Federal bureaucracy. He just happens to hold a Top Secret clearance.

I know several whistleblowers who have been vilified publicly by the very bureaucracies where they exposed wrong doing–Bill Binney (NSA), Kirk Wiebe (NSA), Ed Loomis (NSA), Russ Tice (NSA), Diane Roark (Congress), John Kiriakou (CIA) and Peter Van Buren (State). In none of these cases was there a public outcry to protect their identity. And there is one big difference between these whistleblowers and Ciaramella–they had first hand knowledge about wrongdoing in their respective organizations.

Which brings me to the not-for-profit organization that is backing Ciaramella–Whistleblower Aid. According to Wikipedia:

But public records tell a different story. Whistleblower Aid is a “doing-business-as” name. The incorporated name is Values United. It was incorporated in Louisiana in April 2009. The incorporation subsequently was revoked in 2013 and reinstated on 13 March 2017. Here is the Louisiana document: 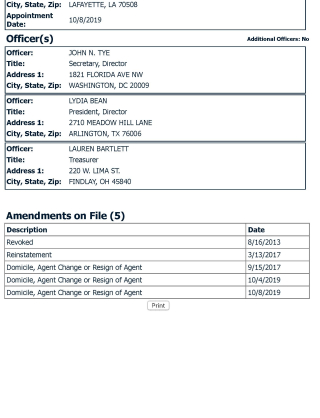 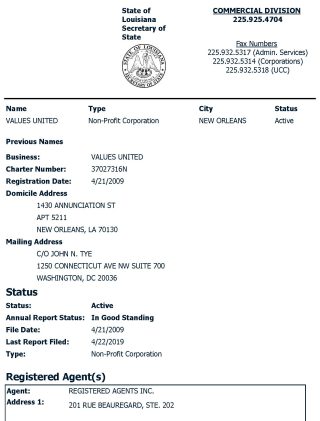 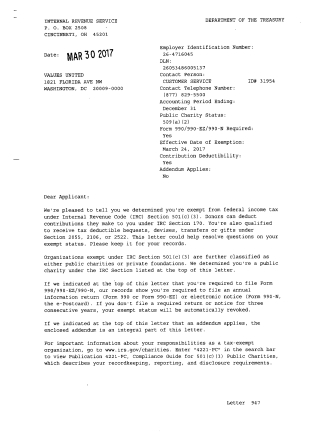 So, it was organized in March of 2017, not September. A minor point I suppose but a key fact.

What do we find when we look at the 990 tax return required for not-for-profits? The DBA name for Values United is Whistleblower Aid: 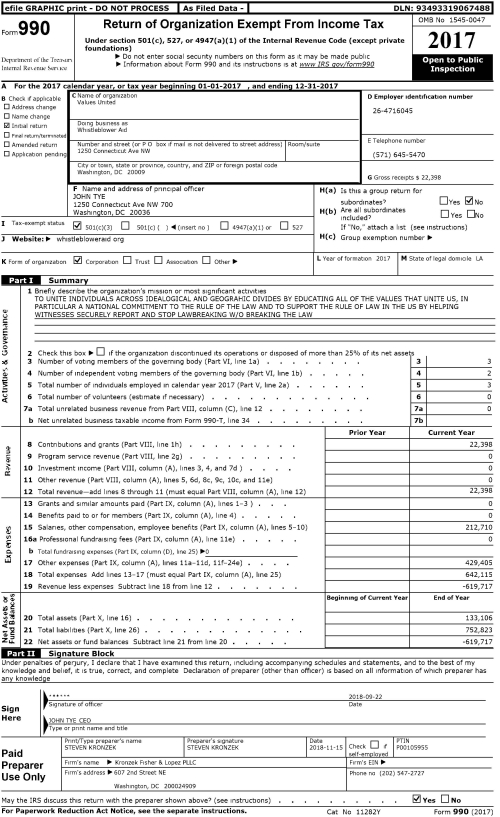 There is another oddity revealed in the tax return for Whistleblower Aid–huge liabilities. Total assets at the end of 2017 are $133,106.00. Total liabilities? $752,823.00. Where was the money going? Who was getting paid? And how is an organization with more than $600,000 in debt able to stay afloat. True not-for-profits are supposed to operate according to strict oversight and rules. Is Whistleblower Aid doing what it is chartered to do or is it acting as a partisan political organization, something a charitable group is not allowed to do. It is worth looking at.

31 Responses to Is Whistleblower Aid a Charity Fraud? by Larry C Johnson