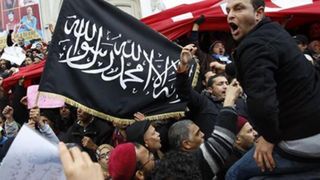 "Several thousand Islamists took to the streets of Tunis on Friday to defend the Islamist-led government from popular demands for it to resign over the assassination of a secular opposition politician.
As Islamists and secular opponents staged rival protests over the future of Tunisia's Ennahda government, the interior minister pointed the finger of suspicion at a hardline Islamist, saying the same gun had been used in Thursday's killing as in an assassination earlier this year that provoked violent protests.
"The people want Ennahda again!" and "No to a coup against democracy!", the Islamists chanted, rejecting demands for a new government of national unity.
"  Reuters

Isn't this where the "Arab Spring' began?  It is amusing to witness the spectacle of Islamists like  Al-Nahda chanting their support of democracy.  The only democracy they are interested in is an election that brings then to everlasting power.  After that they are quite willing to murder to remain in power.  pl