John F. Kennedy and the Question of World Peace 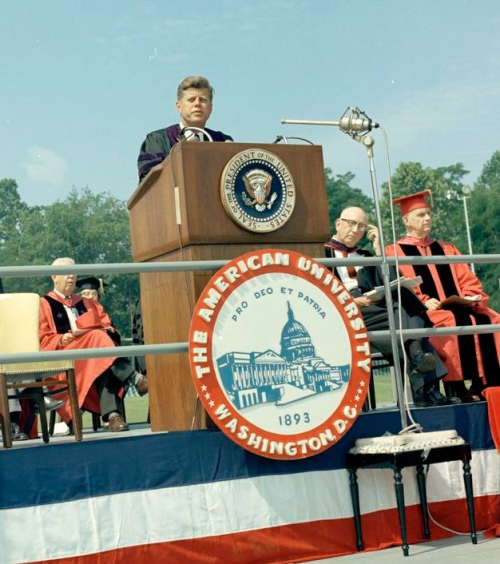 I don't normally write about historical anniversaries. They're usually well covered by a plethora of writers much better than I. But today's date marks an event which intersects a project I began working several months ago on the history of nuclear weapons and related policies. Fifty five years ago, today, June 10, President John F. Kennedy delivered a commencement address at American University in Washington, D.C. on what he considered to be the most important matter of his time, indeed for all time: world peace. I read through it a couple of months ago and found it to be well worth remembering, not only for its particular content, but for the direction that Kennedy indicated in those remarks of where he wanted the world to go in.

To begin with, Kennedy clearly rejected the kind of "peace" that the geopoliticians have been taking us towards in recent years. "What kind of peace do I mean? What kind of peace do we seek?" he asked rhetorically. "Not a Pax Americana enforced on the world by American weapons of war. Not a peace of the grave or the security of the slave. I'm talking about genuine peace – the kind of peace that makes life on earth worth living – the kind that enables men and nations to grow and to hope and to build a better life for their children – not merely peace for Americans but peace for all men and women – not merely in our time but peace for all time."

Remember, this was about eight months after the Cuban Missile Crisis. Kennedy was very acutely aware of the danger that nuclear weapons represented. Weapons of such power made no sense, he said, and the accumulation of weapons that could never be used except to keep the peace couldn't possibly be the only way, much less the most efficient way, to keep the peace. "I speak of peace, therefore, as the necessary rational end of rational men," he said.

Kennedy called on his audience to not only look at the leadership of the then-Soviet Union, but also to look inward at our own attitudes "as individuals and as a nation – for our attitudes are as essential as theirs." He rejected the notion that peace was impossible. "By defining our goal more clearly – by making is seem more manageable and less remote – we can help all peoples to see it, to draw hope from it, and to move irresistibly towards it."

Secondly, Kennedy rejected demonization of the Soviet Union. While he found Communism repugnant, he said "we can still hail the Russian people for their many achievements – in science and space, in economic and industrial growth, in culture and in acts of courage." He also made a number of points which are even more relevant today. "Almost unique among the major world powers we have never been at war with each other," he said. "And no nation in the history of battle ever suffered more than the Soviet Union suffered in the course of the Second World War. At least 20 million lost their lives. Countless millions of homes and farms were burned or sacked. A third of the nation's territory, including nearly two-thirds of its industrial base, was turned into a wasteland – a loss equivalent to the devastation of this country east of Chicago."

Today, Kennedy went on, it is the US and the Soviet Union that are in the most danger of devastation. "All we have built, all we have worked for, would be destroyed in the first 24 hours," he said. "So, let us not be blind to our differences," Kennedy advised, "but let us also direct attention to our common interests and to the means by which these differences can be resolved. And if we cannot end now our differences, at least we can help make the world safe for diversity. For in the final analysis, our most basic common link is that we all inhabit this planet. We all breathe the same air. We all cherish our children's future. And we are all mortal."

The remainder of Kennedy's remarks dealt with the arms control efforts of his administration which culminated in his declaration that the US would no longer conduct nuclear tests in the atmosphere. "Such a declaration is no substitute for a formal binding treaty – but I hope it will help us achieve one."

Glenn Seaborg, who was chairman of the Atomic Energy Commission at the time, reports in his 1981 book "Kennedy, Khrushchev and the Test Ban," that the genesis of the speech came from a discussion that Kennedy had with the journalist Norman Cousins. Cousins had been engaged in a series of candid discussions with Khrushchev and had related the content of these discussions to the White House. "I advocated making a breathtaking offer to the Russians and the President said he would think about it…" Cousins recalled.

Seaborg reports Ted Sorenson, who followed up with Cousins on the idea, as relating:
"Unlike most foreign policy speeches–none of which was as sweeping in concept and impact as this turned out to be–official department positions and suggestions were not solicited. The president was determined to put forward a fundamentally new emphasis on the peaceful and positive in our relations with the Soviets. He did not want that new policy diluted by the usual threats of destruction, boasts of nuclear stockpiles and lectures on Soviet treachery."

In Seaborg's view, "It is doubtful that Kennedy would have taken such an independent course prior to the missile crisis. The enhancement of the president's prestige resulting from his handling of that event was a liberating influence."

Seaborg reports that the speech had little impact at home (though some conservative Republicans called it a "dreadful mistake")–the public was focused on the civil rights crisis and there was a sex scandal underway in Britain (the Profumo Affair forced Macmillan out of power later in the year). But it had a profound impact in Moscow. Seaborg reports Khrushchev as later telling Averell Harriman that in his view, the speech was the best by any American president since Franklin Roosevelt and that that it had taken courage on Kennedy's part to make it. According to a CIA report dated June 11, "the Soviets were favorably surprised by the tenor of President Kennedy's June speech because it reflected a broad progressive approach toward solving current problems. The atmosphere created by this speech is now such that the possibilities of agreeing on a test ban treaty are very good. No chief of state would make such a speech unless he were completely convinced that agreement was probable." The full text of the speech was published by Izvestiya on June 12. A TASS wire of June 14 quoted Khrushchev extensively favorably reviewing the contents of the speech. A State Department memo of June 15 reports that the thrust of Khrushchev's remarks on the speech in an interview with Pravda and Izvestiya were mostly negative. Among other things, the memo says, Khrushchev said that the president's words were not matched by American deeds, "a line which, among other things, protects Khrushchev against Chinese charges of gullibility."

Regardless, the door was now open to the Atmospheric Test Ban Treaty, which following a mission to Moscow led by Averell Harriman, was signed on August 5 and ratified by the US Senate on Sept. 24. Kennedy's assassination two months later brought to an end any chance of a follow through on that treaty which, afterall, was only a partial achievement of the goal that he was aiming for, which was complete nuclear disarmament. Instead, we got the Kissingerian MADness of the 1970's where even the Carter Administration, during its development of PD 59, could speak blithely of killing off one-third of the population of the Soviet Union. Under the conditions that exist today, can we recover Kennedy's vision of a peace for the benefit of all mankind?

This entry was posted in Willy B. Bookmark the permalink.