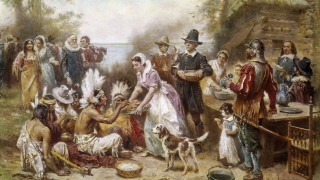 “They landed at a place called Plymouth (once a famous voiture Americaine ) in a wooden sailing ship called the Mayflower (or Fleur de Mai ) in 1620. But while the Pelerins were killing the dindes, the Peaux-Rouges were killing the Pelerins, and there were several hard winters ahead for both of them. The only way the Peaux-Rouges helped the Pelerins was when they taught them to grow corn (mais). The reason they did this was because they liked corn with their Pelerins.

In 1623, after another harsh year, the Pelerins’ crops were so good that they decided to have a celebration and give thanks because more mais was raised by the Pelerins than Pelerins were killed by Peaux-Rouges.

Every year on the Jour de Merci Donnant, parents tell their children an amusing story about the first celebration and “Kilometres Deboutish” (Miles Standish)”

This secret (esoteric) history of the first Thanksgiving was discovered many years ago by Art Buchwald (a leader of the Brooklyn branch of the “Illuminati”) whilst he was doing research in the catacombs located beneath the “Crazy Horse” saloon and “salle des danseuses” in Paris (France) (as opposed to Paris, Virginia). The document had lain there moldering amid the cast off “caches sexes” and empty cheese crates for centuries (maybe).

Buchwald successfully penetrated the exoteric “surface”of the text itself to reveal its true meaning. This technique of discerning the inner truth of history had been acquired by Maitre Buchwald while studying at the feet of a great scholar of such matters in Peoria, Illinois (or somewhere out there in the middle of the country) perhaps during his internship at the University of Chicago?

Here, he shares his wisdom with us.

(PS)  There is a legend that Buchwald found a note from Brigadier General Sir Harry Flashman VC left with the detritus to the effect that Sir Harry had discovered these materials and had gathered them in the basement for some future use.  Presumably Flashman never returned for them, but this story may be apocryphal.

Comment:  By way of historical and genetic accident I had nine ancestors among the Pilgrims.  Surely you can see them there in the painting. PL

This entry was posted in History, Humor, Whatever. Bookmark the permalink.