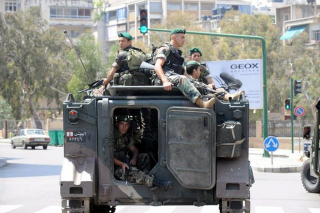 The Lebanese Ambassador to Russian Federation, Chawki Bou Nasser told Sputnik News on Tuesday that Beirut requested a large number of Kornet ATGMs (anti-tank guided missiles), T-72 Tanks, and advanced cannons from Moscow. “Lebanon needs weapons to fight these people [terrorists], and especially the Russian rockets, there is one well known, Kornet, because Lebanon got some of the weapons and used them effectively, and is still working with the Russian side to provide these kinds of weapons… Kornet, and the cannons, and the tanks, T-72 tanks, although old — but Russia promised to renovate them and to update the systems in these tanks — and of course the shells for the cannons, ammunition,” Nassar said. “Lebanon is, of course, expecting to get these within a year,” the ambassador said, expressing hope that Russia will also follow up on its previous pledge to supply up to nine helicopters through a grant. (Al Masdar News)

The Lebanese Army has been using the same equipment since the early 80s. Their main armored vehicles are the M-113 APC and the M-60 MBT. I was a  young SF captain when we supplied them with this stuff. When I left, the LAF 8th Brigade was battle tested and competent. That was a long time ago.

For the first time since their civil war(s), the LAF is now forced to face an external enemy. It must take on the Nusra and IS jihadis in the Qalamoun Mountains. Whether they like it or not, the LAF must also coordinate with Hezbollah. They’ve done okay for the last two years, but they need improved equipment and training if they want to become a credible defense force. The upgraded T-72 tanks will be almost equal to the T-90. The Kornet ATGM is as good as anything we have and its thermobaric rounds are sweeter than sweet. What AA missiles might this equipment include? Obviously Russian trainers will accompany this equipment.

Israel is deathly afraid of improved LAF equipment falling into the hands of Hezbollah. That’s why every serious effort to equip the LAF with modern weapons has been stymied in the past. The Russians, however, may have decided that it’s time for the LAF to become a full and capable part of the R+6 coalition in the fight against the IS and it’s jihadi allies. We may be talking about the R+7 this time next year. If Russia supplies this equipment, will it go directly through Beirut or Tripoli? Will this spur closer coordination between the LAF and Hezbollah? What will Israel do? What can she do?

This entry was posted in Israel, Lebanon, Russia, Syria, TTG. Bookmark the permalink.