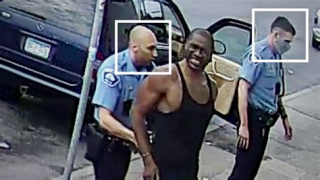 First there was the transcript. I wrote about that on 11 July (see here). Now we have the video. Floyd was complaining of not being able to breath at least five minutes before the police were forced by Floyd to put him on the ground.  The transcript I posted on the 11th shows clear evidence that George Floyd was complaining of not being able to breath. This video provides the visual proof. George Floyd was not killed by police. He was suffering respiratory distress caused by a Fentanyl overdose. His inability to breath had nothing to do with the neck restraint applied by the Minneapolis police.

Now we know that the entire premise of the Black Lives Matter riots was based on a false claim of police abuse. Derek Chauvin did not murder George Floyd. George Floyd, a criminal and drug addict, killed himself by ingesting a drug that Doctors use to shutdown a patient’s respiratory system.

As I noted on July 11th, the transcript exonerates the police. This is why the Minnesota Attorney General tried to keep the public from seeing the video evidence for themselves.

I am re-posting the transcript so that you can compare it with the video. The video starts with two Minneapolis Police officers approaching Floyd’s vehicle from the driver’s side. One of the officers has his pistol drawn and pointed in Floyd’s direction. However, per standard practice, his finger is not, I REPEAT NOT, on the trigger. If the finger is not on the trigger the gun will not fire itself.

Also worth noting that the police were not physically aggressive with Floyd. They did not punch him or jerk him around. Floyd, in his drugged state, was not cooperative. It is a shame that the officers who detained Floyd lacked clairvoyance or the ability to read Floyd’s mind or mentally test the chemical content of his blood.  That kind of knowledge might have given them an early clue that Floyd was a dead man walking because of the toxic brew of illegal drugs he had shoved into his system.

Here’s the link to the full transcript.

The incident starts with a store manager reporting that George Floyd had just given him a counterfeit bill.

The two officers (Kueng and Thomas Lane) go outside and begin the investigation by trying to get George Floyd out of his car:

Floyd was not cooperative. He was disoriented and not acting rationally. Floyd was accompanied by another black man. In contrast to Floyd, the other gentleman followed police instructions:

George Floyd was not passive nor cooperative despite media claims to the contrary. The video that fueled outrage across America tells a very misleading story. The words of the transcript are not lies.
In the next relevant bit of conversation, Floyd concedes that he passed a bad bill to the shop owner who called the police and admits he was not following police instructions.

On page 12 of the transcript we get the first evidence that Floyd is high on something and is “foaming” at the mouth. Officer Kueng is very concerned about Floyd’s erratic behavior:

Floyd claims he was “hooping” earlier. According to the Urban Dictionary, “hooping” refers to smuggling/transporting something that is inserted in one’s rectum.

Floyd’s erratic behavior escalates as Officer Kueng and Lane try to put him in the police car:

Pages 15-21 of transcript record the futile effort of the Officers to get Floyd into the police car and Floyd’s drug-induced frenzy and paranoia.
On page 22 of the transcript Floyd starts to claim that he cannot breath. He has not been placed on the ground. In fact, he ASKS THE POLICE TO PUT HIM ON THE GROUND. Cops are not Docs. They do not have magical powers to diagnose whether or not someone is actually having a medical emergency or faking it. Up to this point in their interaction with George Floyd, they had little evidence to trust anything Floyd said:

The transcript and the video are damning for all arm chair prosecutors who jumped to the unwarranted and unsupported claim that the police killed George Floyd. The did not.  tFloyd’s respiratory crisis was caused by the Fentanyl he had ingested before the police showed up on the scene. That evidence also is reflected in the autopsy report. Those who have rushed to judgment in condemning the Minneapolis Police Department will have to do some major mea culpas.